Beer vs. Vodka: battle of the grains

Last weekend in Warsaw we went on a tour of the Polish Vodka Museum. Poppy’s a vodka fan, but to be honest I’m usually no great lover of Poland’s favourite drink. However, it was fascinating to learn about the history of vodka and the methods used in its production. Poppy has written more about the museum itself so I won’t repeat it all, but the tasting session at the end got us thinking about the differences and similarities between vodka and beer.

One of the main similarities is that the recipe for both usually begins with some kind of grain. In beer, this is usually barley but can also be wheat, rye or oats. To make certified Polish vodka, there are five grains that can be used (rye, barley, wheat, oats, triticale), as well as potatoes. The ones we tried during the tasting session were wheat, potato and rye. Just like beer, each one brought its own unique flavours and characteristics. We’d spotted quite a few beers around Warsaw brewed with different grains, so in the name of research we sampled a few to find out which ones worked best in either drink.

The first vodka we tried during our tasting was Ostoya, a wheat vodka from the Bieszczady Mountains region. Wheat is fairly rare in Polish vodkas, but more common internationally and is probably most well-known used in Grey Goose. The wheat lent a nice smoothness to the spirit, without the harshness of some vodkas. It had quite a sweet flavour too which lingered for a while, though in a good way. You could definitely just drink this one on its own with a bit of ice. 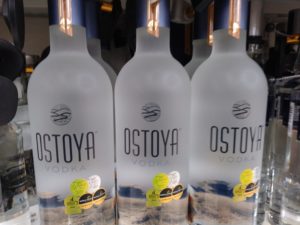 Wheat beer is obviously not as big in Poland as in Bavaria or Belgium, but a couple of the bigger breweries do their own version. I quite like wheat beers but I understand that the wheat itself isn’t what gives these beers their distinctive flavour. Usually this comes from the yeast, or from adjuncts like orange peel or coriander. We sampled Żywiec Białe in one of the bars in the trendy Pawilony complex just off Nowy Świat street. It was nice enough but nothing too special – I think I’m going to give this round to the vodka.

Next up was in our tasting session was a rye vodka, Wyborowa. Rye is the most common grain for vodka-making in Poland and Wyborowa is one of the best-known brands. From the aroma alone you could tell this was going to have a bit more kick than the wheat vodka. On drinking it had a spicy, almost black pepper flavour and there was a distinct burning sensation at the back of my throat and all the way down. This one was a reminder for me why I don’t usually drink vodka! 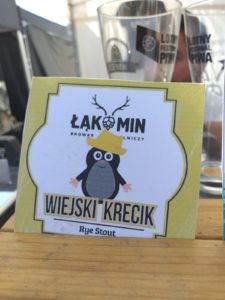 Over the last few years, I’ve seen rye in all sorts of beer from IPAs to saisons. At the Lotny Festiwal Piwa we came across Łąkomin Wiejski Krecik (5.5%), a rye stout. The rye gave the beer the same spicy notes it had given the vodka, but in a stout they seemed to work so much better; it made a pleasant change from the coffee or dark chocolate flavours often found in stouts. I’d definitely try another rye stout next time we come across one. This round definitely goes to the beer.

The third and final vodka we sampled was the most unusual of the lot, a potato vodka. Luksusowa is the only certified Polish Vodka distilled from potatoes and it had a completely different feel to the rest. Oily and viscous, it really coated your mouth with its slightly bitter, slightly savoury flavour. Best of all, there was no afterburn at all, making it perfect for drinking straight. This was definitely my favourite vodka of the three! 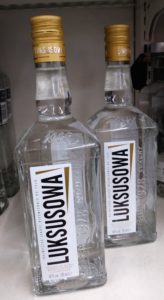 We did actually come across a potato beer back in Latvia, but we’ve not spotted any in Poland. Instead I decided to go for a beer made from one of the other grains allowed in vodka making: oats. Piwne Podziemie Rich’n’Creamy (5.6%) oat IPA was a really interesting beer; the oats added a smoothness that allowed the juicy characters of the hops to shine, much like a milkshake IPA.

So, the decider: beer or vodka? The potato vodka was my favourite of the three, but the oat beer also came out on top. It’s a tough one but on balance I’ll have to go for the beer.

As much as I enjoyed learning about and sampling some vodkas, I think beer will always win for me – sorry Poland!