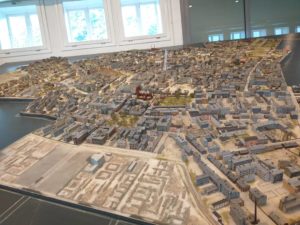 While poverty and famine were rife in the ghetto, there was a general expectation for it to be self-sustaining, requiring minimal input or attention from the German troops. There were several factories and working departments in the ghetto, employing around 75,000 people. With the production of these goods the Radegast Station, to the north-east of the ghetto area, became an instrumental asset in the transportation of these goods to Germany between 1939 and 1942. Beginning in 1941, the nature of movements through this station drastically shifted to the trafficking and deportation of Jewish people. Today the station has been preserved by the city of Łódź as a museum and memorial site, dedicated to the thousands of Jewish people who were brought here as the final stop on their journey to certain death. 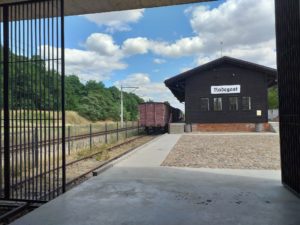 Between 1941 and 1942 the station saw the arrival of around 20,000 Jewish people and in excess of 5,000 Gypsies from around Europe, expected to live and work in the Łódź ghetto. 1941 also saw the first wave of deportations from the ghetto occur, following the establishment of the first death camp Chelmno-on-Ner to the north-west of Łódź. Three initial waves of deportations occurred in January, February and May 1941. These consisted of the unemployed, their families, those deemed unsuitable for work and those in receipt of benefits or assistance. In these initial deportations more than 55,000 individuals were taken from the ghetto, made to walk to Radegast Station and then transported in cattle trucks to Chelmno-on-Ner where they were murdered. One of the engines and three of these trucks remain at the Station as part of the historical preservation by the city of Łódź. 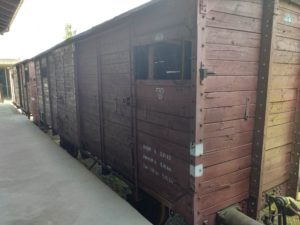 The autumn of 1941 saw one the most detrimental deportations from the ghetto. The majority of the 15,000 individuals taken to their death were children, effectively wiping out an entire generation from the city. The Allgemeine Gehsperre (General Curfew), as it was known, saw any baby, toddler or child who was not of working age taken from the ghetto to the station where they were also sent to Chelmno-on-Ner to be executed. The museum has a dedicated commemoration for these child victims of the ghetto, including a documentary slide reel comprising of photographs of the children from the orphanages, hospitals and schools within the ghetto. 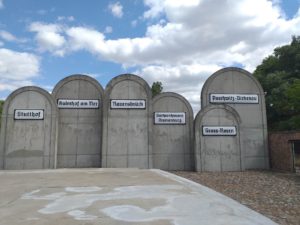 Within the ghetto the full extent and purpose of these deportations was not widely known. When people were called for deportation they were allowed to take 12.5kg of luggage with them, thus it was assumed they were being moved on to a new ghetto – one of the original trunks used for this purpose is prominently displayed in the old station building, which now houses the museum. However, as the volume of these deportations increased the reintroduction of these personal belongings into the ghetto population as well as the open transportation of deportees belongings from the station without their owners evoked a deep fear in the inhabitants of the ghetto as to the expected fate of both these individuals and themselves. Especially poignant in the museum is the many books laid out on wooden desks. On inspection these books contain copies of the many hundreds of pages listing the individuals to pass through Radegast on their final journey to Chelmno-on-Ner, and from 1944 to Auschwitz-Birkenau (75,000 individuals were deported during August of this year to Auschwitz in an attempt to close down the ghetto). 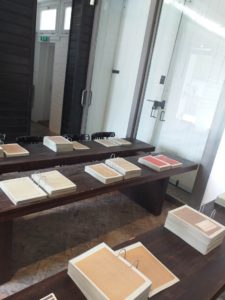 While the station remains untouched, within the museum compound there is one new addition, a concrete bunker running alongside the still operational railway (though this station is now a museum a replacement has been built a little further down the line). The bunker chronologically represents the impact and events of the Łódź ghetto, and the role of the station during these times. There are also preserved collections of personal belongings and lists and lists of ghetto inhabitants attached along the walls. While inside the station building the information plaques focus on those who were deported from the station to the death camps, the bunker acknowledges the conditions of the ghetto and its impact on its population. A final inscription in the bunker reads, “… During the years 1940-1944 more than 43,000 Jews perished in the Łódź Ghetto: some were brutally murdered, most died of starvation and disease…”. 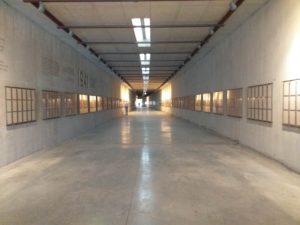 It is estimated that around 200,000 individuals were residents of the Łódź Ghetto during its four years of operation. These included both residents of the city but also Jewish people from across mainly western Europe. Of these 200,000 it is thought that between 5,000-7,000 individuals survived World War Two (2.5%). The decision to preserve Radegast station is significant as it not only preserves history as a site of memorial and remembrance, but also acts as a symbol of absolute abhorrent brutality and of complete disparagement of Polish people towards the events that occurred there. Tributes immortalised through memorial plaques at the station include the former President of Poland, while the initiation of the project to preserve the station was recognised by the Mayor of Łódź.

Would I recommend? I would recommend the museum and the memorial site surrounding it as it is a significant place within the history of the city which was been carefully and thoughtfully preserved. Entry to the museum is free, reflecting its significance as a place of learning and remembrance.

How long do I need? If you arrive outside of the museum opening hours, walking around the memorial would take no more than 30 minutes. However, with the museum itself a couple of hours is advisable.

How do I get there? The station is located quite far from the city centre. The easiest way to get there using public transport is to take a tram towards the Jewish Cemetery and alight at the final stop on the line. From here it is a 10-minute walk, alongside the far edge of the cemetery. The replacement station is signposted from the main road, with Radegast station being a further 100 metres further along the road.