It would have been weird for us to travel through Silesia and not spend a few days in its capital, Katowice. At first, we were only intending to stay for a weekend as we were expecting a visitor to fly out to meet us, but as their plans changed so did ours, and a bit of internet research about how to spend a weekend in Katowice commenced. Across several travel blogs, Katowice is presented as the black sheep of Polish cities, lacking an Old Town and consumed by its industrial heritage. While many of these blogs went on to praise what a hidden gem the city was, I have left not being quite as convinced – though for definite there are hidden gems within its boundaries. 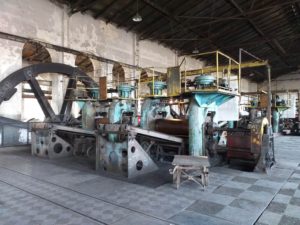 For me, Katowice represents a niche subset of tourism, especially unusual within Poland. It definitely delivered in beer tourism, but it also introduced us to industrial tourism. Industrial tourism is the bread and butter of the city, and rightly so. Silesia was transfomed in the latter half of the 19th century, converting the rural landscape into an industrial one. Coal and steel became the money makers for the area, and as such chimneys kept being erected to meet the demand, and people kept moving in to start a career and make some money from these new resources. While a visit to every factory seemed unfeasible owing to the length of our visit there, we could not have left without dipping our toes into this world of industrial tourism. 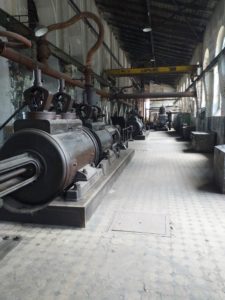 The Szopienice plant, was one of three zinc plants in Katowice; the others being the Lipney and Welnowiec plants. These plants all operated through the traditional method, developed in Silesia, of extracting zinc from its ore using furnaces. As industry developed, new factories were built which introduced electrolysis for this process, and as such a decline in product led to the old factories closing in the late 20th century. Having closed in 1976, the Szopienice plant was consequently purchased and restored across 15 years, as a testament and space of collective memory for the plants, the production methods, the machinery and the men who brought these spaces to life. Now it is the location of Walcownia, the museum of zinc. 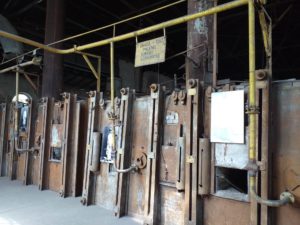 The museum housed in the Szopienice plant is spilt into two rooms across the one level of the expansive former warehouse. A series of plaques guide you through the museum, and through the process of zinc extraction, beginning at the furnaces, taking you through the hydraulic power pumps and ending with the zinc roller machines. All elements of this elaborate process have been restored and proudly presented, adorned with images of those using the respective machinery in the early 20th century. In the corner of the main machinery room also sits a small laboratory, complete with an extensive collection of conical flasks and mini blast furnaces. 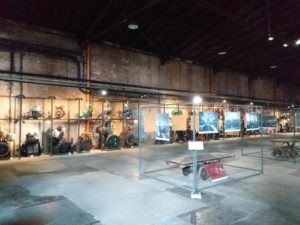 The second room is more eclectic in its curation, seemingly bringing together a rather impressive collection of engines (seriously, there were ones from all corners of Europe), with documentary photography and then combining them in a space that appeared to double as an events hall. We attended the museum on a Saturday as it noted that if eight people were there, they would run some of the machinery through. However, in the time we were there no more than five people arrived, so we were not so lucky.

Would I recommend? The actual museum was really interesting and the range of machinery available to view and discover is impressive. If you are like me and this is your first taste of industrial tourism, I would definitely recommend the zinc museum.

How long do I need? No longer than an hour. While there is a lot to see it is only across two rooms so you can get through it in a morning quite easily.

How do I get there? We got a tram from Katowice centre to the Szopienice Roździeńska and from there it is a 15-minute walk up Roździeńska street, though it is signposted from the tram stop.

Warming up in Wrocław