Walking around Warsaw it is still quite surprising that less than eighty years ago nearly the whole city was destroyed, and all that is there today has been restored, rebuilt or repurposed. Despite beautiful restorations, especially in the Old Town, what is evident is the culture and traditions that have been upheld in the city, beyond the facade. Several ‘first’ museums have opened in Warsaw over the past few years, shining a spotlight on these socially, culturally and historically important elements that help contribute to the essence of the city. While we were there, we had the opportunity to visit two such museums; the Neon Museum and the Museum of Polish Vodka. 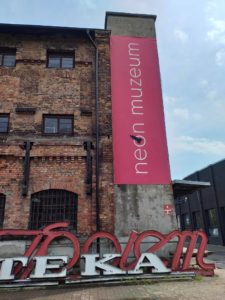 While the content of the museums is obviously different, they do share some similar attributes, most particularly in the historical significance of their locations. Both can be found in the Praga District of Warsaw. One of the most ethnically and culturally diverse districts, Praga was one of the only areas of Warsaw which was not destroyed in World War Two and as such still retains several buildings in their original pre-war architecture. Despite being in the same district they are separated by a couple of kilometres and a train line so if you intend on visiting both on the same day some planning will be required. 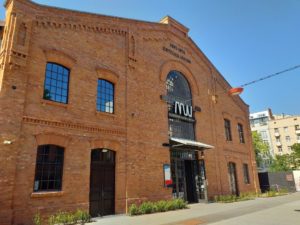 The Museum of Polish Vodka was opened in 2018 in the renovated complex of the 19th-century Koneser vodka distillery. The distillery was not destroyed by the Germans during the war as they had a use for the product it was producing – drinking the vodka. As such the building is relatively unusual in the city as the structure remains unchanged, and even with it’s renovation to the museum the integrity has been maintained. Throughout the museum there are constantly little nods to the original building, such as the use of the old wooden vodka barrels in the flooring and preserved unopened bottles from this period. 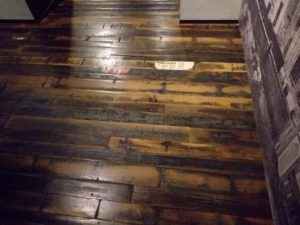 Entry to the museum was 40zł each (around £8), which included a (compulsory) guided tour, a short film and a vodka tasting. You can tell the museum is relatively new as it is overtly interactive, with touch screen used in almost every room. The tour begins with a Tarantino-esque film with monologues from the original warehouse manager, label designer and international sales manager from the 60s, and from here carries on through five different rooms, ending in a tasting room. The first room is probably the most important as it sets out the premise of what Polish Vodka is. This is something I naively hadn’t considered, but only around 10% of all vodka produced in Poland qualifies as Polish vodka. For vodka to be Polish vodka it must be made with alcohol obtained from agricultural sources, these being five grains or potatoes. In the instance where grains are used, they may be mixed, though when potatoes are used only potatoes are to be used. However, the most important clarification in the production of Polish Vodka is that all the raw resources need to be obtained in Poland and the production must also take place in Poland only. 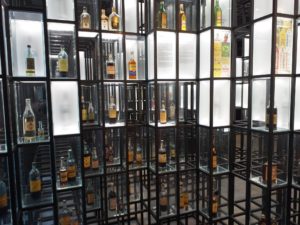 The fourth room of the museum offered a glimpse into why the rates of Polish Vodka produced out of the overall product production in the country are so low. Across one wall are two maps, one showing Poland in 1937/1938 and the other as present day. While the land mass of Poland has decreased between the two installations (owing to land losses following World War Two), the actual number of physical distilleries has also massively decreased from over 1000 to not even quite 100. This is for two main reasons, 1) financial reasons, importing the product can be vastly cheaper than the associated costs of agriculture and production to ensure the vodka is Polish Vodka, 2) the decline of master distillers in the country. While the second issue is widely prevalent within trade work, the museum seems optimistic that significant efforts across the country are being made to ensure these distilling traditions are continued. In this room a video is shown of the father and son team of Ostoya vodka, a relatively new addition to the market using wheat in their production of Polish Vodka. This was one of the samples we got to enjoy in the tasting. 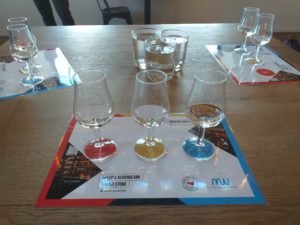 While learning the history of Polish Vodka was interesting, there is nothing quite like immersive inquiry. The tour ended in the tasting room, where we were greeted by a jolly man named Kacper who set about talking us through the styles, smells and sensations caused through the different influences of the raw ingredients. The three vodkas tried were Ostoya, a wheat vodka, Luksusowa, a potato vodka, and Wyborowa, a rye vodka. With each one we were encouraged to smell the vodka, hold it in our mouths for 3-5 seconds to get the full flavour, and then to swallow. My personal favourite was the wheat vodka which was surprisingly sweet and perfectly palatable as a short, though Dom preferred the potato vodka, a much more bitter tasting vodka with a sharp and quick aftertaste. 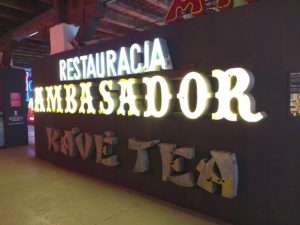 Neon in Warsaw is rather like easter eggs in Disney films, once you spot one they seem to pop up everywhere. Neon signage makes the city stand out against others, though the Neon Museum stands as a reminder that this was not always the case. Opened in 2005, the Neon Museum has dedicated itself to collecting, preserving and restoring neon signage from across Eastern Europe. In its collection are everything from bar and restaurant signs, to those from public libraries and children’s toy shops. These are illuminated and put on full display for people to come and enjoy. 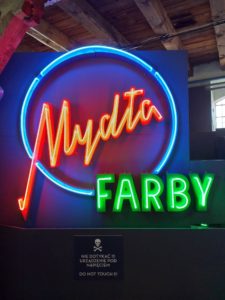 The museum documents both the history of neon, its use in marketing and its specific use in Communist influenced Poland. It becomes clear through this initial introduction that the increased use of neon correlated with the increasing Soviet influence across the country in the 1970s. Once Poland declared itself a Republic in 1989, a lot of these signs were actively destroyed as people attempted to move away from what they felt they represented at that time. However, with influence from the museum, these signs are slowly beginning to re-emerge in the city, as Warsaw is redefining what neon means to it as a city, bright lights, artistic influence and individuality not achieved through more traditional advertising iconography.

Would I recommend? Both museums were really interesting, however to go to each may be a struggle if you aren’t staying in Warsaw for a week like we did. Out of the two, I would recommend the Vodka museum more if you are only in the city for a short time, purely for its proximity to the old town.

How long do I need? The Vodka museum is a guided tour and tasting which take approximately 70 minutes. We spent around an hour in the Neon museum which was plenty of time to read all the displays, see the exhibits and watch the short film available in the museum.