I think the mountain air may have got to me as for the first time this trip I have decided to write the beer article!

Zakopane is a resort town in the south of Poland, famed for its spectacular landscapes of the Tatra Mountains which surround it. As well as these over two million tourists visit each year to hike, ski, climb, snowboard, cycle, ice skate and eat – Oscypek, a famous smoked sheep’s cheese, originates from this area. Notably absent from this list is beer. So why write a post about Zakopane? 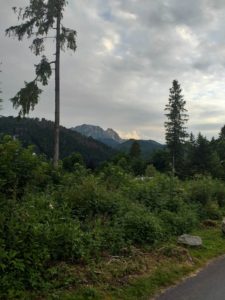 As with any well-intentioned plans, our long weekend in Zakopane was meant to be spent hiking and taking in the beautiful scenery that makes this town famous all over the world. In reality, from the minute we arrived to the morning we left there was a monumental amount of rainfall, with many of the tracks being off limits and ski lifts being closed. While it stayed dry just long enough for us to get to the top of the Gubałówka Mountain, the rain didn’t manage to hold off for the 40 minute walk to the hostel; this meant we went a bit off plan but managed to find three fantastic places I would recommend for beer that maybe don’t seem what they are from the outside. 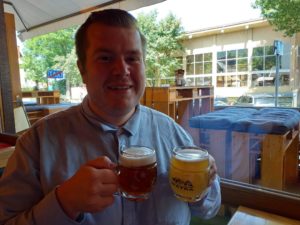 When going in search of beer a brewery is always a good start, and so we begin with Browar Watra, a microbrewery at the end of Krupówki Street, the main pedestrian street in the town. The building housing the brewery is split into four distinct parts, each offering a different experience for its customers. Aside from the brewery itself there is also an outside seating area (for when it’s dry) providing breathtaking views of the surrounding mountains, one of the largest dining halls I have ever seen, complete with dancefloor and stage, and a ‘pub’ area comprising of a large bar and stool seating around it. We opted for the pub area where we enjoyed a Märzen-style beer and a honey beer, two of their core range of four beers: the other two being a Helles and a wheat beer.

A little further up Krupówki Street you will come across Bar Na Szlaku, a canteen style café with an extensive range of bottled craft beer. The quantity of the beers available came as a shock to us as from outside it looks exactly like one of the Polish milk bars, canteen-esque café searching set meals from a hatch – in fact admittedly we initially only went in as I needed to use the facilities! 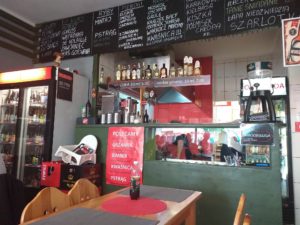 However, once we caught sight of the fridge we settled in and opted to try Piwna Stacja’s New England IPA between us. Like most of the Polish IPA beers, for me it was too over-hopped with a dense bitterness that wasn’t anything near a NEIPA. Dom on the other hand didn’t mind it and finished it off while I attempted to translate the menu on the wall. As we stumbled across this bar we only had a small amount of cash on us so opted to try just the one beer, though there was a decent enough range of breweries and styles available you could happily spend an afternoon here sat outside, watching the world go by.

In the middle of Krupowki Street, the Regionale Alkohole shop was an unexpected treasure for me and my time in Zakopane. From the street the shop looks like a typical tourist trap. We went inside to have a look at the few local beers they had in cans and found a staircase leading to the shop’s onsite bar. This wasn’t advertised from the outside (or if it is it isn’t clearly signposted) but was a lovely surprise. The bar is somewhat bizarrely kitted out in baby pink furs and rawhide, but is very elegant and modern. The bar itself specialises in the local products sold upstairs, with many people coming through to buy single shots to determine which strength and flavour they would subsequently go onto purchase. 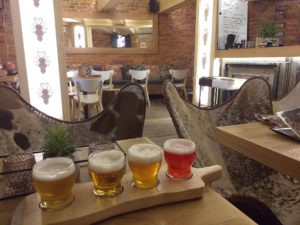 We were going to join them in having a shot but then realised there was a tasting flight of regional beers available for 14zł (around £3), so with that we took a seat and got tasting. The flight comprised of: Giewonciak, a lightly carbonated lager with bitter notes and a dense yeasty taste; Zakopianskie, another lager style beer with a lingering bitterness and a slightly grassy taste; Świstok, a filtered wheat beer which didn’t impress and Dziko Wiśnio, a regional cherry beer which strongly resembled cherryade but in a good way, with a not unpleasant sweet, although slightly artificial, cherry flavour.

While I don’t think Zakopane will be wining the title of Beer Capital of Poland anytime soon, it was great to find places in such varying styles which offered a decent beer in a decent surrounding – and though hiking in the mountains would have been nice, I’ll accept sitting with a good beer and admiring them from afar as a suitable compromise.