Most visitors to the Zabłocie district of Kraków travel there exclusively to see Oskar Schindler’s Enamel Factory. Others head there to visit MOCAK, the Museum of Contemporary Art in Kraków. However, from my experience it appears that only ourselves and a few primary school aged groups make the trip there to explore the Lipowa 3 Glass & Ceramics Centre (Lipowa). Why this is the case is quite perplexing, as Lipowa has been one of the most dynamic and interesting museums I have visited in a while. 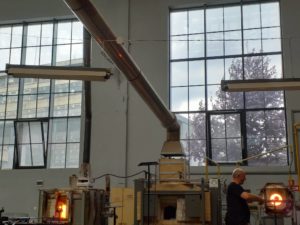 When we arrived, we were guided into the main space of the museum, a large warehouse-cum-studio with a comprehensive glass blowing set up in the foreground. In this area hourly glass blowing demonstrations are held, where two craftsmen create figurines ranging from apples to cats, while offering a remarkably close up demonstration of the craft, especially given the nature of the material and the excessive heat. Accompanying them is a guide who documents the process and details all the instruments used.

When we were there, we were sharing the session with a group of excitable school children, which did mean that the guide was offering the information in Polish only. Despite this it was very easy to follow as the whole demonstration was completely visual in its nature. Once the final figurine had been completed, a tiny glass bird, everyone was invited in turn to have a go at blowing some glass themselves. We decided to cut our losses at this point and venture forward to Lipowa’s historical museum rather than follow 20 children slobbering on the blow pipe. 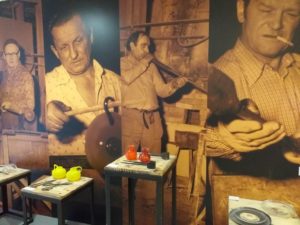 On the second floor of Lipowa, and overlooking the warehouse, a curated room provides an extensive overview as to the historical role of glass blowing in the city, and the specific details and history of this museum. Where the museum is housed today was formerly a glass factory owned by Leon Bąkowski and Dawid Chazan, an engineer and a businessman. Primarily the factory produced glass bottles for use with pharmaceutical products, however it was confiscated by the Germans during World War Two and stopped production. This area of the museum brings together first-person testimonies of employees documented from this time, photographs, tools and other surprising artefacts such as staff time sheets and locker doors. 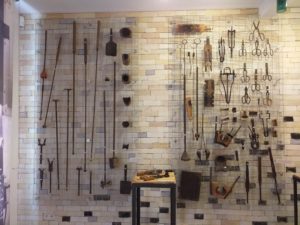 Aside from the historical elements of the museum, Lipowa also has an exhibition dedicated to decorative glass from the 19th and 20th centuries, as well as rooms dedicated to the works produced within the factory since its nationalisation following World War Two. When Lipowa was founded in the 1970s, this collection was brought together by the founders of the museum. The collection includes goblets, mugs and glasses all presented around a central chamber lit to take the appearance of a kaleidoscope.

This room flows into an adjoining chamber where the founders of the museum, plus key glass art influencers who have worked or held residency since the 1960s, are presented through mini professional autobiographies. It is interesting the learn about the specific stylistic influences and mannerisms of the artists and their work, especially as the final room of this space of the museum is filled with a comprehensive selection of their pieces. 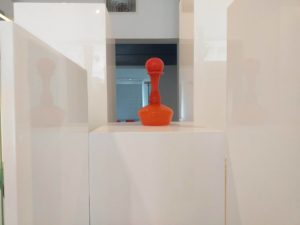 The final zone of the museum was a small office type room with a few chairs and a single TV. Here documentary footage was being shown on a loop of the factory as it was in the 1970s. Glaringly obvious was the complete lack of health and safety, with the predominantly male blowers working with the molten glass in little more than flip-flops and a pair of shorts, understandable given the heat produced by the furnaces but probably not the ideal clothing should you smash liquid glass on your person. As we could hear the school children slowly catch us up in the museum, we decided it was time to call it a day; leaving to the inevitable sound of a smashing glass and a teacher shouting!

Would I recommend? I think if you are making the effort to visit the Zabłocie district then it is worth popping into the museum, if not to only view the free ceramics exhibition in its entrance hall. If you are into multimedia art works and glass blowing specifically, this is a beautifully thought out museum to explore these interests through.

How long do I need? Demonstrations happen every hour so if you time it carefully the whole thing should take no longer than 1hr 30minutes. However, you are free to walk between the demonstrations and the museum upstairs at your convenience with no restrictions on how long you can stay.

How do I get there? Lipowa 3 Glass & Ceramics Centre is located directly opposite Oskar Schindler’s Enamel Factory which is heavily signposted.