If you are to read any guidebook on Lithuania the most notable site to visit is the Hill of Crosses, an area of pilgrimage in the north of the country. Most recommend visiting the hill as an excursion from Vilnius, however as we were travelling through the north of the country we decided to stop for the weekend in Šiauliai, the closest town to the hill, and Lithuania’s fourth largest town by population.

The decision to stop in Šiauliai itself was one that I would recommend to anyone considering visiting the hill. We arrived on a Friday night, and were pleasantly surprised by how the town transformed into a party town from the sleepy place we had arrived in earlier that day – Dom has written a bit more about our evening here. Outside of the nightlife, the town also has a beautiful lake you can walk around and several museums and statues. 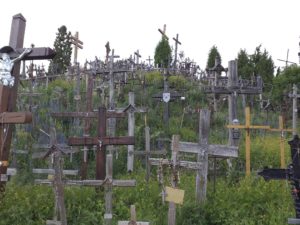 While entrance to the hill is free, we decided to go all out and hire a private guide for our trip. One of the main reasons for this is that the hill is located about 12km outside of Šiauliai, and public transport only goes about two thirds of the way there. With the average temperature being around 28° while we were there, the prospect of avoiding a 4km walk seemed worth the €15 charge.

Our guide Simon met us outside our apartment and after giving us both our essential kit for the day (a bottle of iced water!) he proceeded to recommend to us all his favourite bars as we drove through Šiauliai. Having been born and raised in the town he was keen to point out all the landmarks that otherwise we would have missed and relaying the town’s history to us. One notable place he pointed out on route was the Saint Peter and Paul Cathedral, which rather unusually for a European church was surrounded by defence turrets. 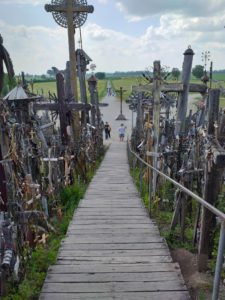 The approach to the hill was rather unexpected. One minute we were driving down a tiny country road looking at the storks which were nesting on the roadside and then there were loads of coaches and tourists appearing seemingly from nowhere.

From the roadside there is a long sweeping path towards the hill. While we were walking here Simon told us a pretty comprehensive history of the crosses, which was useful as despite being a major destination there is little to no information about what the crosses represent or how they came to be there. He explained that the crosses began to be placed there by Lithuanians in the late 19th century in commemoration and remembrance of their loved ones. 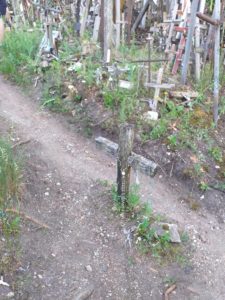 During the Soviet occupation in the 20th century the crosses took on a new meaning for Lithuanians. Religion was not allowed under communism, and as such the crosses – which were mainly made of wood – were burnt. Despite the site being guarded by Soviet troops, Lithuanians would sneak to the site under nightfall to replace the crosses. Being caught would mean execution for them but maintaining their traditions and the symbolism of those who had passed in their communities was so important it was worth the risk. 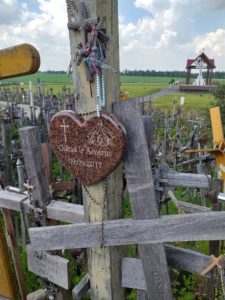 Simon explained that for most Lithuanians the Hill of Crosses was an important traditional and historical landmark, but that its religious semblance was only really solidified to the wider world in 1993 when Pope John Paul II visited the site declaring it a place for hope, peace, love and sacrifice. As we walked through, he was keen to show us that despite the crosses traditionally being placed there to commemorate those who had died, now they were placed there in celebration of life and love; such as stone hearts celebrating marriages or children’s toys celebrating births.

As we walked around, I was quite struck by how, despite being filled with crosses, the hill didn’t feel overtly religious. For me it was a place of celebration: celebrating new lives, new families, different cultures, different religions. While we were there, we saw a wedding party posing for photos in front of the crosses. Simon told us that this was a common occurrence on a Saturday, as local people come to the hill, lay a cross for love and compassion in their new marriage and have photos with the crosses as a way of commemorating those who they have lost in their life. It seems nice that despite being filled with tourists, the site still holds cultural and symbolic significance for those from the Šiauliai region. 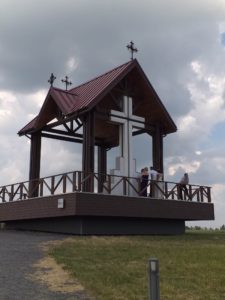 At the last count in 2015, it was reported that the hill had over 100,000 crosses on it which were over the height of one metre. This did not include the further thousands of smaller crosses which are brought in pilgrimage every day. While the exact figure is ever changing, it is thought that there are over 200,000 crosses in total. Anyone can bring crosses to the site – we saw quite a few people placing crosses while we were there – so long as they do not exceed three metres in height, in this instance you would need a permit.

Would I recommend? Yes. I think. It was quite a sight to see, but I am glad we only travelled a couple of miles to get there. I think a full day trip, as it would be from the capital, may be a little too much.

How long do I need? We spent no longer than an hour there, though our tour lasted about two hours as we were also driven to other significant buildings and monuments in Šiauliai.

How do I get there? While there is a car park at the site, I would recommend getting a guide, like we did, as it made the experience a lot easier.