It was not the intention to visit the Ninth Fort Museum while we were in Kaunas, as we were unsure what public transport would be like given it was a public holiday weekend for the Summer Solstice. However, after a few days in the city the number of commemorative plaques and statues referencing and commemorating individuals who had either spent time or lost their lives there settled the decision, reasoning that we would only regret it if we did not visit – with that we decided to risk Sunday bus service for the 6km journey to the north of the city.

Getting to the Ninth Fort from the centre of Kaunas was relatively simple – a twenty-minute bus journey followed by a 500 metre walk – and very reasonable at €1 each each way. As we travelled on a Sunday buses were limited, which was not an issue on our journey out, but did mean an hour and twenty wait for a bus back. 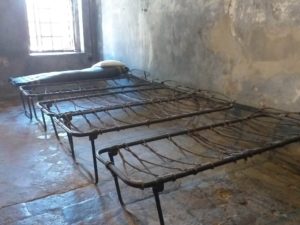 The fort was initially built as a defence fort in the Dutch style but was converted into a prison in the early 20th century. At this time Kaunas was a main trading city and had a relatively affluent population. This also meant that it attracted several thieves and criminals, with the prison being a way of housing these outside of the city remit. The fort began operating as a hard-labour prison in 1924. When walking around the fort as it is today, it still maintains a strong semblance to a prison, though on each room description its former usage is also given. For example, the image above used to be the old kitchen. 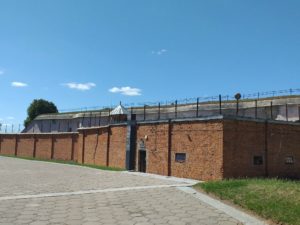 The old prison of Ninth Fort now houses the museum’s exhibits on the Kaunas hard labour prison, the Holocaust in Lithuania, the history of the fortress and its usage throughout 1940-1941 as a transfer point for political prisoners to forced labour camps. A separate construction on the site is the home of the Occupation museum. 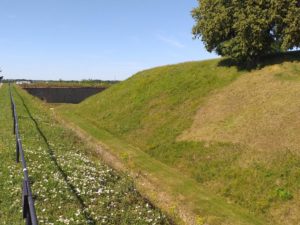 To the left of the old prison building stands the site of the mass murders that happened here throughout World War Two. It is thought that over 50,000 people were executed here, consisting of Russians, Lithuanians, Polish and over 30,000 Jewish people. Groups of up to 100 people were marched into the trenches surrounding the fort system, forced to lie face down and then shot: following this a further 100 were brought in, forced to walk across the bodies and lie face down on them for the process to be repeated. The trenches today are shown in the memorial with a sign reading ‘There near this wall Nazis shot and burned people in 1943-1944’ – a few words that encompass the complete brutality of the atrocities that took place here. This was the only mass execution site in Lithuania where Jewish people from across Europe were brought. 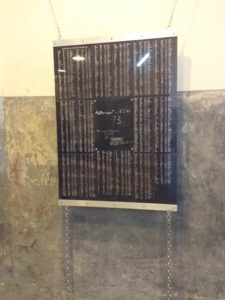 One of the cells in the old prison now documents the history of ‘Convoy 73’, the final mass killing to occur at Ninth Fort. Convoy 73 was a group of 878 French Jews that were deported to the Baltic States on 15 May 1944. Of the 878, around 600 were brought to the Ninth Fort, with the others going to Tallinn. Only 22 of the deportees survived. The cell that the exhibition is in is especially poignant as the walls still bear the inscriptions and markings of those from Convoy 73 who were captive here. The exhibition includes photographs and memorials to the men, women and juveniles who were killed at the Ninth Fort, provided by their families and the Jewish communities in France. 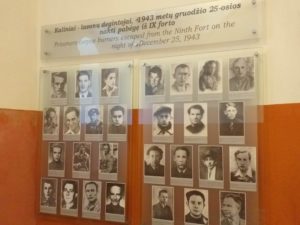 Another poignant exhibition in the old prison is the cell dedicated to the memory and actions of the corpse burners. As the Nazis realised that the war would not be won, they began to destroy the evidence of their atrocities to hide what had happened. In Lithuania, this involved corpse burners as evidenced here and with the burning brigade at Paneriai. The corpse burners were prisoners selected to dig up the bodies of the deceased and burn them, effectively destroying any evidence. In the Ninth Fort there were 64 prisoners selected for this role – 61 Jewish, 2 Russian and 1 Polish. These prisoners were brought to the Ninth Fort on 20 September 1943 and conducted their role until Christmas Day of that year where they all managed to escape. Of those who escaped 37 were ultimately caught and killed. I was quite surprised to learn in this exhibit that the initial order to burn the corpses (Operation 1005) was given in November 1942, suggesting an awareness of the fate of the war far earlier than I had realised. 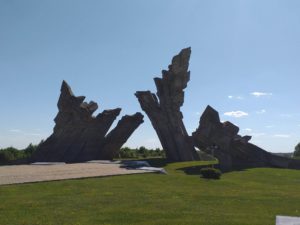 Today the place of the mass burials is marked with a grassed area and a Monument to the Holocaust standing at 32 metres. Overlooking this is a plaque reading, in many languages, ‘This is the place where Nazis and their assistants killed about 45,000 Jews from Lithuania and other European countries’.

While the Ninth Fort museum was opened in 1959, the second main building in the memorial grounds was not opened until thirty years later. This building houses the Exposition of Occupations, and details the first and second Soviet Occupations, as well as documenting histories of those native to Kaunas throughout these times. From the outside the building itself is a concrete dream and looks worn and confused against the sereneness of the rest of the memorial. However, the inside architecture is worth a visit in itself, adopting elements from religious buildings, art galleries and nuclear bunkers. 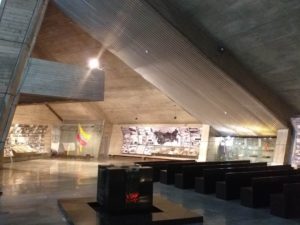 The Exposition of Occupations began with a segment on the first period of Soviet Occupation, documenting the beginning of World War Two, before the Nazi invasion. Key in these were the massacres that took place across the country on Soviet authority. What was surprising about these were that some had taken place in towns we have visited and yet they are not widely spoken about. One that stuck out for me was the massacre of Panevėžys physicians between 22-28 June 1941. Four doctors were targeted by Soviet security for the crime of assisting injured, needy or sick individuals who held anti-Soviet beliefs. The doctors were tortured and killed. 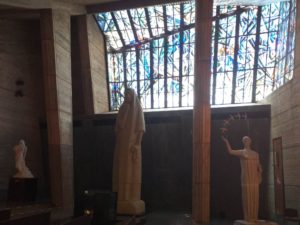 Another segment within the Exposition of Occupations centred on Romas Kalanta, a student in Kaunas who died after setting fire to himself outside the musical theatre in Kaunas in 1972. I had heard of him before as we had visited this square the previous day and there is a tribute to him there, as well as 19 boulders placed across the square – one for each year of his age. Kalanta’s act was purposeful and intended to raise questions about the Soviet regime in the country. While Soviet leaders attempted to pass him off as insane, it started a mass demonstration, especially by students, in the city who began questing Soviet authority. The segment documents Kalanta’s childhood and houses a few his possessions, including a notebook where he wrote the intentions of his suicide. It also details the repercussions of his death, including students who were actively participating in the rallies and their fate under the Soviet regime.

Would I recommend? Most definitely, even if you are in Kaunas outside of the visiting hours of the museum, it is still worth the trip just to visit the Holocaust memorial.

How long do I need? We spent about three hours and I think this is a fair amount. One hour per museum building, plus an extra hour to see the grounds and the memorial.

How do I get there? The number 23 bus runs from Kaunas centre to around 500metres from the memorial. You will need to pass beneath the main road, but the route is well signposted.

Vilnius: a little bit of everything