While I only learnt about the Bikernieki Memorial through Lonely Planet, I was already aware of Paneriai before we arrived in Lithuania. Though the two today bear similarities in some respect – they are both Holocaust memorials in areas of mass shootings in woods outside the respective capitals – Paneriai differed at the time due to the regimented, militant executions, utilising pre-existing structures to assist in the atrocities. It is also one of the primary locations of corpse burning in Lithuania, something that did not occur in the Bikernieki forest. 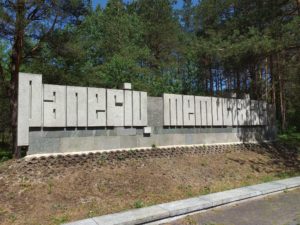 As with many of the mass executional memorial places, finding information on how to get to the site was not that easy, with the only information in Vilnius tourist information given in Lithuanian only. We decided that getting to Paneriai railway station would be a good start, and then google mapped a rough walking route from there. Paneriai is a small village on the outskirts of Vilnius, mostly known for freight and cargo trains. Despite this we found that trains ran there three or four times an hour and were a very reasonable 60 cents a person. Within five minutes of walking from the station we were well out of the village and immersed in thick woodland. 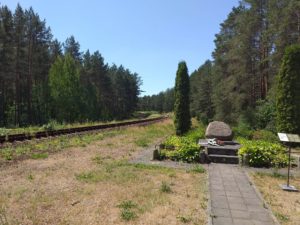 Today the Paneriai Memorials are managed by the Vilna Gaon State Jewish Museum, and offer a place for reflection, remembrance, celebration and learning. While we were there, we were speaking to an elderly man who oversees the site during the day who was keen to tell us about what had happened there and why it must be preserved. The preservation on the site is the element which is the starkest as entwined between the individual memorials and statues are the preserved pits were tens of thousands of Jewish, Polish, Lithuanian and other people were executed, buried, exhumed and burned. 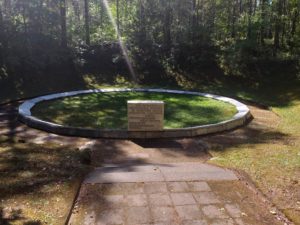 The entrance of the memorial site is marked through a stone etching of the works ‘Panerių memorialas’ and a stone sculpture by architect Jaunutis Makariūnas. This initial sculpture immediately reflects the conflict in preservation notable throughout the memorial site. The site was established during the Soviet Occupation, and as such the killings were said to be Soviet citizens who were the victims of fascism. It was only after the re-independence of Lithuania that the specific impact of the Jewish people could be noted in this place. The central black granite stone was inserted after the independence and reads, in Hebrew, Yiddish, Lithuanian and Russian, ‘among the victims killed in the Paneriai forest there were 70,000 Jews: men, women and children’. In 2004 marble plaques were inserted on both the side stones replacing the terminology of ‘soviet citizens’ with ‘one hundred thousand people’. 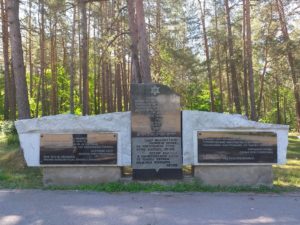 Before the outbreak of World War Two the Soviets had been preparing Paneriai as a place for oil storage, directly next to the railway and not far from the capital city. They had prepared large pits for the oil vats and trenches for the pipework. Once the Nazis occupied Lithuania they discovered this area and decided to use it as a place to exterminate the population of the Vilnius Ghetto. The pits were ‘converted’ into killing pits. While the methods of murder varied across the operation of this site, most commonly Jewish people were brought from the ghetto via wagon or train under the pretence of going to work. Once in the forest they were stripped and lined around the edge of these circular pits. Gunfire would open, and the bodies would fall into the pit, a ready-made grave. A thin layer of dirt would be placed on top and then the next round of individuals would be brought in to meet the same fate. 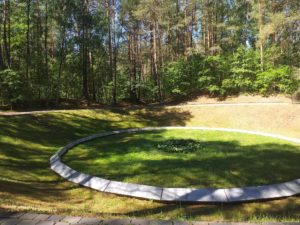 The image above depicts the largest pit in the Paneriai complex (in total there were five, though people were also lined up in the trenches). It is 25-30 metres in diameter and it is thought that around 25,000 individuals were executed in this specific pit.

In the entire Paneriai memorial site there is only one pit that was not used for executions of this nature. This is the bunker-pit, which in many ways served as sinister a purpose. As well as the brutality and frequency of killings in Paneriai, it is mostly infamous for its rate of corpse burning, a method employed by the Nazis to cover up their crimes. Young, strong Jewish men were brought to the forest from the Vilnius ghetto and kept in the bunker-pit. Their sole role was to exhume the thousands of bodies from the pits and burn them. The exhumed bodies were to be laid in rows of around ten people, face down, with a layer of wood on top. This would be repeated until a stack of around 10metres was completed. Then it would be burnt. The ladder in the pit was used to carry the bodies to the upper levels of the burning piles. The prisoners forced to carry out this role were known as the burning brigade and consisted of 76 men and 4 women. Some of those from the burning brigade managed to escape and according to their testimonies from December 1943-April 1944 there were as many as 21 places for these fires to happen in the site, and as many as 68,000 corpses could have been burnt there. 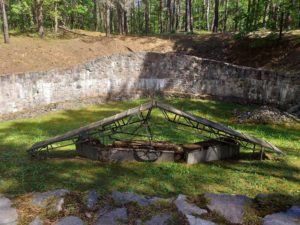 While the majority of those who were murdered at Paneriai were Jews (70,000 of the 100,000), there were other minority groups and nationalities who were targeted and persecuted by the Nazis in Lithuania who were executed here in the same manner. There are several dedicated memorials around the memorial site to these groups, including a memorial for the estimated 1,500-2,000 Polish people who were killed here and the below monument which was erected in 2004. This monument is dedicated to 86 Lithuanian Territorial Defence Force soldiers who were shot to death at Paneriai by the Nazis following a conflict with the Lithuanians and the Germans over the force’s areas of operation. 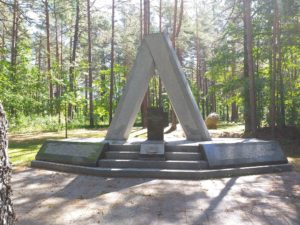 At the heart of the memorial site is a small museum, only one room in size. This room, for me, had the most impact as it included a video of testimonials which were genuinely astounding to watch. What was extraordinary about the events at Paneriai forest, was its proximity to Paneriai, a village with inhabitants who worked the land of the forests as part of their livelihoods and continued to throughout the period of activity. These were eyewitnesses, children and adults, who saw daily what was happening and yet were powerless to do anything. Even after the war had finished sharing their testimonials was not an option as the country went straight into Soviet occupation. The film was the first opportunity that many of these people were able to share what they had seen, how they felt about it, and the lasting life-long impact it had had on them.

Would I recommend? Most definitely, though I would recommend visiting the Holocaust Exhibition in Vilnius first as it provides a really useful context and commentary for what you will see in Paneriai.

How long do I need? We spent around three hours there, though that included watching the film in the museum in full. You could walk around the site in an hour, though I would suggest longer.

How do I get there? By public transport train is the best bet. You can get regular trains to Paneriai from Vilnius central train station. It is a 15 minute walk down the road directly outside the station in Paneriai and well sign posted. Be aware with return trains as the platforms in Paneriai are not labelled and there is no ticket office.

Vilnius: a little bit of everything