Growing up in the UK the social significance of puppetry arguably begins and ends with Punch and Judy. While the occasional show may appear at Blackpool a few times a year, as an art form it is one that is relatively undervalued. It has been refreshing to see that in the Czech Republic, the art of puppetry is still valued and practiced, with almost all the towns and cities we have visited since being in the country having maintained puppet theatres. While we haven’t had the opportunity to go to one of these shows, while in Pilsen we did spend the afternoon at the Puppet Museum, which itself has its fair share of puppets. 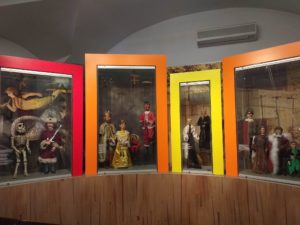 The museum is in a beautiful renaissance style building on the central Town Hall square in Pilsen. Spread over three floors, the museum takes you through a comprehensive history of puppetry in Pilsen, from the second half of the 17th century up to present day. The first marionettes – the puppets operated from above most commonly associated with the Czech style – first began to appear in the country from the late 1600s. The ground floor of the museum introduces the beginnings of puppetry in Pilsen, including documentary images from the theatre at Na Jikalce in the 1880s, the first recognised puppet theatre in the area. 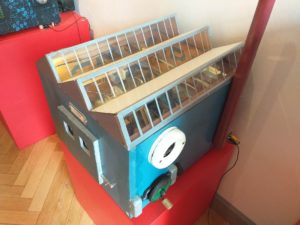 Also on the ground floor several boxes can be seen. At first we were not sure what they were for, but some investigating (and coming across a pretty well-hidden sign!) led us to uncover what they were – travelling puppet theatres. These boxes contained intricate wooden sculptures and carvings which were charmingly painted and affixed to small mechanisms. These mechanisms are controlled by small handles on the exterior of the boxes. When looking through the glass eye hole you can view these scenes playing out as you turn the handles. Across the museum there must have been at least two dozen of these boxes each depicting a different scene, from the story of Adam and Eve to the Moulin Rouge. 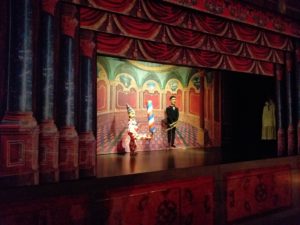 A lift from the outdoor terrace takes you to the second floor, which is dedicated to the revolutionary figures in Pilsen’s puppetry history, Josef Skupa and Jiri Trnka. The museum has several original puppets designed, manoeuvred and voiced by these men, as well as short videos of original performances. However, the most impressive element of this floor is the reconstruction from the Novak Theatre, a wooden replica stage taking up a whole wall and showing short performances from a number of puppets. While the performances themselves were very basic in their construction (a notable difference of having mechanically operated puppets as opposed to manual), it was a lovely way to see the puppets rather than just in a glass box. 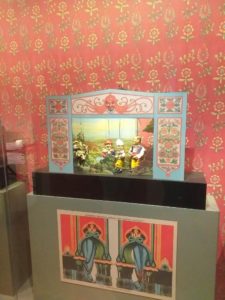 The second floor also housed a small exhibition on home puppet theatres, which were popular among the privileged classes of the country. These included intricate stages made of both word and cardboard, alongside miniature marionettes. Though significantly smaller than those used in the professional performances, they are still beautifully decorated, with realistic hair and fitted fashionable clothes. Opposite this exhibition is a staircase leading to the third and final floor. They must have realised that viewing these home theatres would ignite the desire to play with museum guests, as at the top of the stairs is a room dedicated to puppets – both hand worn and marionette style – which you can pick up and play with on two constructed set stages. 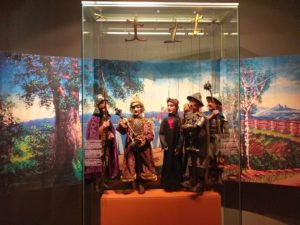 The top floor also gives information on the current role of puppetry as a performance art in Pilsen. This resolves around the Alfa theatre. The Alfa theatre is still operational in Pilsen, and since 2006 it has been run under the creative supervision of T. Froyda, the theatre manager. The current production cast have adopted a largely comical style to their performances and incorporate puppetry with live action and mixed live/puppet performances. Many of the characters and puppets can be found in a room dedicated to the current works of this theatre. At least eight shows are depicted through key set pieces and the full range of marionettes; these are shown alongside videos of the performances and summaries of the narratives.

Would I recommend? I definitely would, this is a lovely museum, really interactive and also very informative. Entry was a really reasonable 60Kč each, around £2.

How long do I need? We we’re there for about an hour and a half in total. I think this would be a minimum time to allocate yourself as you may need longer depending on how long you want to play with the puppets for.

How do I get there? The museum is located in the central square of Pilsen, on the side opposite the Town Hall.