It is difficult to know what to expect of a country purely from a few facts learnt prior to your arrival. However, something that I’d learnt, and was really quite impressed with, before getting to the Czech Republic is that it is the nation with the highest consumption rates of beer globally – really impressive given that it is not even in the top third of global population sizes. That is a dedication that must in some small part be due to the fact the country is also home to two of the largest, oldest and most famous lager breweries. While I am a huge craft beer fan, lager is admittedly my weak spot, and so our travels through the Czech Republic had to include a trip to both – sorry Dom! And what better place to start than with Pilsner Urquell. 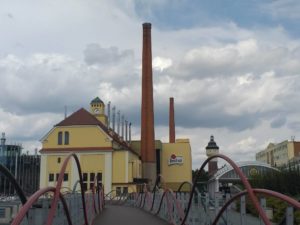 The Pilsner Urquell brewery has made the town of Pilsen its home since 1842. The brewery itself is located not a 10-minute walk from the central train station. While we were staying in the area for a few days, it only took an hour from Prague and would be perfectly manageable as a day trip from the capital. It was a good job we had booked our tour online beforehand as the English afternoon tour was sold out when we arrived, though some spaces remained on the evening tour three hours later. My levels of excitement for the day were borderline ridiculous, as despite being on many a brewery tour before the historical significance of being here really hit and resonated with me; with Pilsen, through Pilsner Urquell, being the birthplace of Pils lager, a style known, brewed and enjoyed by millions globally. 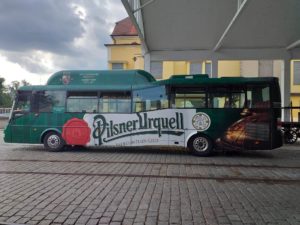 Now, as much as I love lager, I am not as much a fan of tardiness, and so was getting slightly agitated that after 15 minutes of our supposed tour starting time no guide had arrived. The only consolation was that the women working the ticket desk looked equally perplexed and annoyed about this situation. However, one intense phone call seemed to do the trick and soon we were joined by our guide, ready to begin exploring. Typically, the tour begins with a showcase of historical glassware from the brewery, though owing to the lateness of the guide that was put back to the end so as not to disturb the German tour which was following us on time. Instead we were all led outside and onto the Pilsner Urquell bus, headed for the bottling plant. 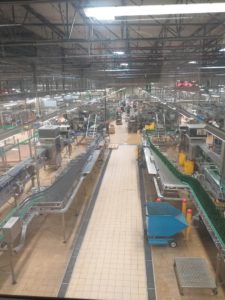 The bus takes you on a short but appreciated journey up between the fermentation vessels and towards the brand-new bottling plant. Outwardly the buildings of the brewery remain consistent to their historical usages, but the bottling plant stands out as being different. Constructed in 2017/2018, the plant is over 33,000m2, and consists of two main bottling lines, two further canning lines and a warehouse. Between them the bottling lines fill around 120,000 bottles an hour. Turnover on the canning lines is equally impressive with one equating to 60,000 cans per hour (CAN60 line) and the other 40,000 cans per hour (CAN40 line). While the machinery is relatively standard for this process, the size is undeniably impressive, and is something the brewery is also clearly proud of with large diagrams adorning the walls full of information and statistics including the investment cost of the building which sits at 1 billion Czech Crowns, around £35million.

From the bottling plant a return journey on the bus drops you outside the brew house. The first section of this is standard for almost any brewery tour, going through the production of beer via introductions to its four primary ingredients, hops, malt, water and yeast. While there were some nice visual effects, a hop grinder and some malts to try, undeniably the best bit of this section was the lift on entry, the largest operational commercial lift in the Czech Republic no less. The second section of the brew house was a little more my scene, getting to see the tanks and the heart of the brewing production line. The brewery uses triple decoction in keeping with its historical practices. In fact, it is clear throughout that most things still operate as they always have to the same recipes and methods as essentially why try and fix what is not broken. 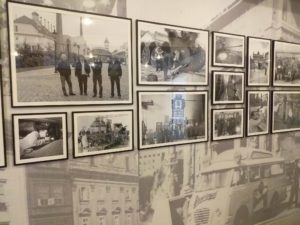 Following on from the brew house we were led into a room, the function of which was not too clear. There were documentary photographs, an old open kettle and images of previous head brewers so for the purposes of this blog post I will refer to it as the ‘memory room’. The memory room was relatively small, especially given the 30+ people on the tour with us, but offered a beautiful preserved and presented series of photographs documenting life in and around Pilsen and the brewery throughout the years. Honestly I couldn’t really hear the guide that well at this point, he really could have done with a microphone, but I was happy to just walk around and have a look, though Dom took this opportunity to have a sit down, having been on our feet for an hour already. 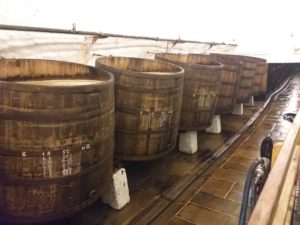 The final stop of the tour was down into the cellars. Traditionally this is where the beer was kept in large wooden barrels, though nowadays this process is completed in lagering tanks. However, as the guide explained, there remains a small number of barrels in the cellars that are kept to the standards and instructions of the brewing process of over 175 years and used as a measure of quality for the brewery. The cellars were vast and interesting to visit and learn about their previous usages, especially the ice room, though the highlight for me was the barrel storage room where visitors can sample beer straight from the barrel, unfiltered and unpasteurised. I had assumed this would be a taster only but was pleasantly surprised to find that everybody was given a glass and pour a 0.3l measure. It is a shame that this version of the beer is not more widely available as it was beautiful, smooth and perfectly kept. 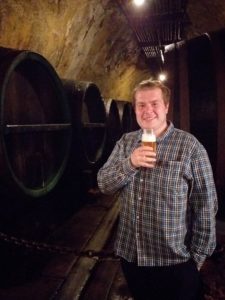 After enjoying our beers, it was time for the tour to come to an end. The tour ended in the official Pilsner Urquell shop, a coincidence I’m sure, which was impressive if only to see the vast array of merchandise which could be branded. With space in the backpacks always a major consideration I opted not to treat myself to anything, I did get a small gift each for my brother and sister which I now must not lose before I return to the UK!

Would I recommend? The brewery tour was a little more than others we have been on, 250Kč each (about £9), but is still good value I feel for what is offered. It was annoying that the guide was late, but he was apologetic and the tour that followed was thorough and interesting, and the opportunity to taste the beer straight from the barrel was something I would highly recommend.

How long do I need? The tours are advertised as lasting 100 minutes, though ours went on for a little longer. Outside the tour route the grounds of the brewery also include seating areas and a restaurant which people are free to walk around, as well as the shop. I would put 3-4 hours aside to get the most out of your visit here.

How do I get there? From Pilsen central train station, the brewery is no more than a 10-minute walk. It is signposted from the station, though once you cross the road the chimneys come into view and you can pretty much follow them to arrive. You do have to cross a main road however via an overhead bridge, which wasn’t immediately obvious, but this is accessible so there were no major issues.