When planning our trip, I was concerned that our time in Slovakia outside of the capital would feel rushed, especially as we we’re staying no longer then two nights in any of the towns on the route. Luckily these concerns proved unfounded. Despite being one of the most beautiful and striking countries I have possibly ever been to, in terms of activities it is definitely more of a seeing than doing place; with only a morning needed to explore the town centres. This did leave us though in the favourable position of having the afternoons free to explore the beer. 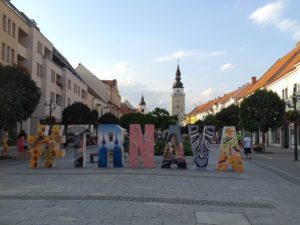 After a morning looking around the inordinate number of churches in Trnava’s centre Dom and I found ourselves with an afternoon ahead and no set plan. We had heard that there was a brewery in the town, Sessler, that we considered visiting. Online reviews of the brewery are quite mixed, though admittedly it seems to fall short with its food while its beer is praised again and again. The only problem was that the brewery is located around a 30-minute walk outside of the town centre. While we have definitely walked further for beer on this trip, the 35° and rising temperatures were beginning to get too much, and we unanimously agreed that to walk that far in that heat was unnecessary. Luckily for us the brewery has a brewery tap in the town centre, meaning we could still try their full range. 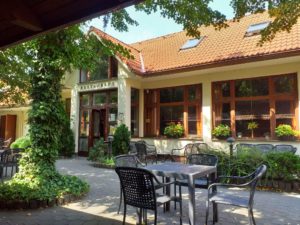 I am referring to Krym Restaurant as the brewery tap, though if you search online there is no noted affiliation between the two; the restaurant only has the brewery’s beers on the taps however, and is covered in promotional materials from the brewery so I think it is safe to refer to it as such. Active since 2008, Sessler brewery specialises in brewing unfiltered and unpasteurised beers primarily for the local market. At the time of our visit, there was an offering of four beers on the taps – a pilsner, a Czech-style pilsner, an imperial pilsner and a dark – plus the option to have a ‘mix’ (half the dark and half the pilsner). We diligently tried all the beers and the mix – all in the name of research! 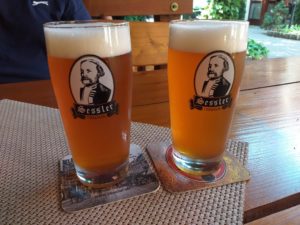 Having taken a seat in the outdoor courtyard, we began our tasting with the 20° (left above) and 11.5° (right above) beers. Despite still being a little lagered out from our three weeks in the Czech Republic, Dom was surprisingly excited to try the 20° Imperial Pilsner (7%). It is not often you see lagers at that strength or indeed style. It was slightly sweet, though that is to be expected with a higher percentage beer, and was also surprisingly acidic. The acidity was not displeasant, more citrusy, but it did make the beer a little tart. I thought that would make it a perfect lager to use in a shandy, though if there is one thing that Dom distains at more than my love of lager it is my love of shandy! The 11.5° Czech style lager was limited in its malty and hoppy notes, though quite yeasty. It was moderately carbonated and beautifully hazy; a good attempt at the style. 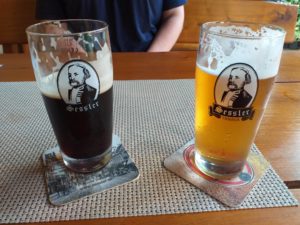 Our next pair of beers were the 13° (left above with a massive sip already taken as Dom couldn’t wait for me to take the photograph) and 10° (right above). The last dark lager we had had was at the Budwar brewery, which was impeccable, so we had high hopes for this. Unfortunately, it didn’t measure up to that level as it was lacking in any of the roasted flavours you might expect in dark lagers. Instead the tasting palate veered towards treacle and liquorice. While a lovely colour, it was a little thin and a little too sweet for my taste. The 10° pilsner was slightly hopped, very bitter and in my opinion the better beer of the two. 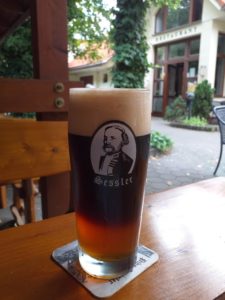 Mixing beers is a concept that I still can’t fully wrap my head around, I mean if you want two styles surely just have two drinks! However, the mix offered in the brewery tap seemed especially popular, with around 30% of the clientele enjoying it as their drink of choice. Personally, I don’t think these two styles blended very well, though they did look nice in the glass. At this point, having tried the full range, we decided to try one of the other specialities of the tap, pizza. This was served fresh, hot and quick and was a welcomed accompaniment to the beer. Overall with the four beers, the mix and the pizza our bill was less than €15, exceptionally good value. 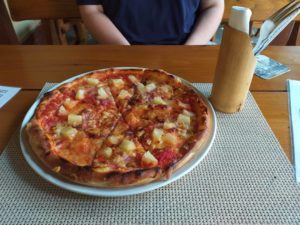 While I think we have tried better beers in Slovakia, the Sessler brewery beers stood their ground amongst the other Slovakian beers we have tried thus far. For me unpasteurised and unfiltered beer is the way to go, especially in more typical brews such as lager, as it produces a taste and smell quite unlike canned and bottled versions. While I wouldn’t suggest travelling to Trnava especially to sample the brewery, if you are in the area than I would definitely recommend the tap room as an enjoyable way to spend the afternoon, and having tasted the range I would also suggest making the trip out to the brewery itself – but only if it is not so hot you might melt on the way!