I love it when you stumble across an absolute gem by accident. This has happened twice so far on our trip, the first time in Prague and the second in Bratislava. On both occasions I have searched, admittedly rather ambiguously, for ‘castle’ looking for the main tourist ones, but been captivated by another castle somewhere in the vicinity of the city which we have ended up visiting instead. In Bratislava this was Devín Castle, a former fortification system located in the village of Devín, 12 kilometres northwest of the capital. 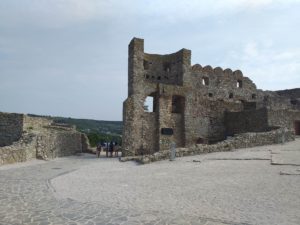 Despite essentially being ruins, even from a simple online search the whole ambiance of the site is immense; it is the meeting point of the Danube and the Morava Rivers which also forms the Austria/Slovakia border. What’s more, despite being a fair way outside of the capital, owing to the very efficient public transport network you can get there easily in under 20 minutes and for the relatively low cost of 90 cents per person – Google also suggests you could walk it but with an estimated journey time of 150 minutes that option was firmly off the table for us. 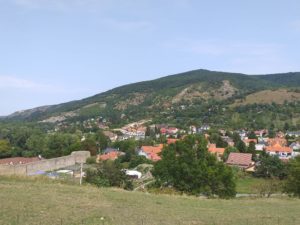 We opted to head to the castle after our lunch on a Friday afternoon. Despite having ridiculously hot weather throughout our stay in the whole of Slovakia, we luckily (and unintentionally) chose to go on a day where the temperatures had dropped quite considerably, especially important given that by nature of being ruins the whole site is exposed to the elements and walking up the hill to the castle in 35° temperatures would have been unbearable. The site of the castle has two core elements: the castle itself, which is ticketed, and a path running along the Danube which is free to walk down. As we had dinner reservations for the evening, we opted to see the castle only, which was a sensible decision as we ended up staying there for over three hours. 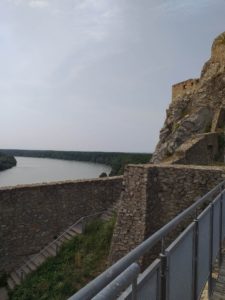 Devín Castle was a former medieval castle, built around the second half of the 13th century, though there are mentions of the castle from as early as 864 in literature. From the 15th century up until 1932 the castle was a privately-owned residence, being occupied during this period by four Hungarian noble families. Despite being privately owned, the castle has always been hailed as a place of social significance owing to its elevated location within Great Moravia. The castle was sold to Czechoslovakia in May 1932 for the symbolic sum of 1000 crowns, around £35. Today the castle is maintained in partnership with the Bratislava Museum. A joint project of theirs was the introduction of livestock onto the grounds of the castle site for the purpose of agricultural maintenance, as sheep are a more reliable and environmentally friendly way to keep the grass short and the wildflowers untrodden than machinery. 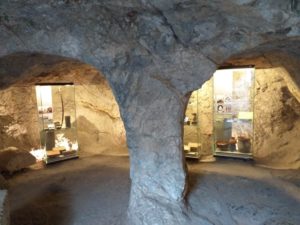 Included in the admission cost to the castle site is entry to the permanent museum, which focuses on the architectural history of the buildings. This location holds a prime location at the very top of the main tower of the castle. To reach this you need to climb up the main tower (about four flights of stairs), and then descend through a hatch door into the body of the rock. The contents of the museum are interesting, but for me not the main selling point. It is quite spectacular walking into the rock beneath the tower and descending further into the labyrinth of stone tunnels. There are only three rooms, but they are really fascinating to see if not for this reason alone. 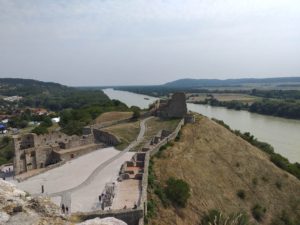 The museum’s positioning within the site also has another advantage in that above it lies one of the most spectacular views I have ever seen in my life. The roof terrace of the castle offers a 360° panorama spanning across three different countries. In the foreground though is what I believe to be the best view of the Danube you could get from anywhere in the world (or at least the 10 countries it passes through!). There are a few benches up there allowing you to have a seat and take it in, something that we did with pleasure – I am not the biggest fan of heights but honestly on that bench in that moment was one of the calmest and safest feelings I have experienced throughout our entire trip. 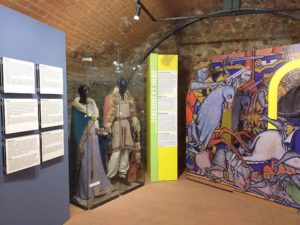 There is a second museum within the site which is also free to access with your entrance ticket. This museum, though confined to one room, manages to take you through the social and cultural history of the castle, beginning with Celts and moving through up to the point of the end of Communism in the country. It was interesting learning more about the latter, especially as I had already heard about some of these events the previous day on my free walking tour. On 10 December 1989 there was an organised march across the city, signifying the public’s desire to end Communism in a peaceful way: on this date around 100,000 Bratislavans marched through the Austrian border (which at this time was a closed border). The castle was a meeting point for this mass of people, and soon they began to cut the barbed wire that sat beneath the castle and formed the border. There are documentary images in this museum, and a second one enlarged outside against the castle wall, which are impactful and bring to life the struggle and elation at this time of people striving peacefully for their freedoms. 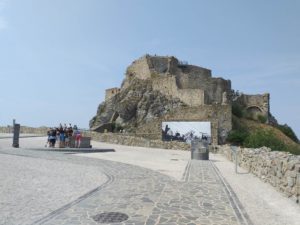 Having seen just about everything in the castle grounds themselves, we set about walking back to the base, via one of the other paths. This lead us via several other ruin sites, such as the ammunition store, a dwelling and a chapel. I think it is worth taking the slight diversion on the way down to see these, but beforehand ensure you fill your water bottle as it isn’t the flattest route. Conveniently there is a tap with drinking water located in the castle, adjacent to the castle well which was dug in the 15th century and is 55 meters deep.

Would I recommend? 100%, it is my highlight of the time spent in Bratislava.

How long do I need? I would allow yourself a good half day to explore the castle, including an hour for transportation (20minutes there, 20minutes back and a little time waiting for the buses).

How do I get there? The number 29 bus runs from beneath the UFO Bridge to the Castle stop every 20 minutes (up to five times midday during holidays). From the bus stop it is a 5minute walk to the castle and is well signposted – though you can see it pretty well regardless!

On the ses[h](sler) in Trnava