When researching things to do in Riga, the Bikernieki Memorial, situated in the Bikernieki Forest, seldom makes an appearance, with myself only hearing about it in passing from a few words in one of the Lonely Planet guides. This reference stated that the memorial was around 1km away from transport links and not signposted, so considering this we set off straight after breakfast to ensure that if we were going to get lost at least we would be doing it in daylight. 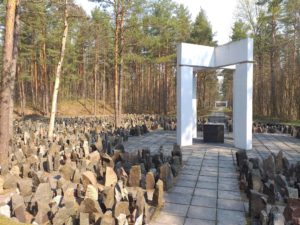 We caught a bus from the centre of Riga, heading in the general direction of the forest. After about 15/20 minutes we reached a stop immediately on the edge of the forest. After getting off the bus (notably the only people disembarking at this random stop at the edge of a forest) we headed into the forest, following a dirt track. While it was true the memorial is not signposted, it is around 18 feet tall and bright white so not too hard to spot.

The Bikernieki forest is the largest mass murder site in Latvia from during the Holocaust, and as well as the Bikernieki Memorial also houses 55 marked burial sites. It is the final resting place of over 20,000 individuals from across Europe murdered during World War Two. The memorial itself sits in the middle of the woodland, beautifully peaceful and somewhat unexpected. While walking around the memorial, we noticed cobwebs hanging across the paths making it clear that visitors here are infrequent at best. 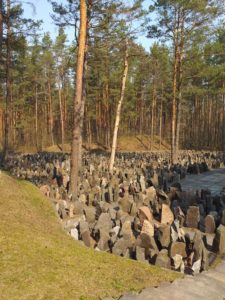 It is made up of around 4000 granite stones, placed vertically in a grid system alongside small granite plaques with the names of European cities representing the hometowns of the victims. In the centre of the memorial sits a large white altar with a granite cube inscribed with a bible verse in Latvian, Russian, German and Hebrew. A rough translation is “Oh Earth, do not cover my blood, and let my cry find no place to rest”. 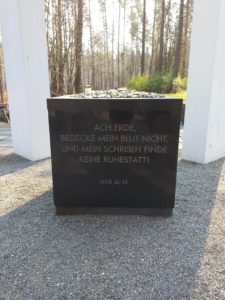 From the memorial itself you can see a number of concrete pillars leading into the forest and away from the road and the memorial. As the walk to the memorial had been considerably shorter than expected, we decided to follow these – not at all put off by Dom’s observation that the deeper into the forest we walked the more it seemed like a horror film location. 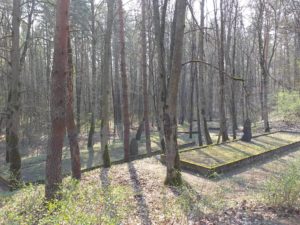 These pillars were marked with either a wreath, a cross or a Star of David, and were situated next to large raised beds around the forest. After a quick Google we discovered that the raised beds were the mass graves, and the pillars next to them noted if they were Jewish people (Star of David), civilians (cross) or prisoners of war (wreath). We walked through the forest for around 45 minutes and there was never a point when one of these mass graves was not in view.

Would I recommend? Definitely, it was beautifully poignant and so interesting.

How long do I need? It only took a few hours out of our day and this was mainly because we decided to walk the 6km back into the centre.

How do I get there? The number 16 bus takes you to the immediate edge of the forest. This runs every 40mins and is about one euro each journey. The walk back followed the bus route and took about 1hr 40mins (including a lunch stop).