When discussing some of the most notable historical museums in Riga it seems somewhat absurd referring to them as historical as many of the events are with living memory of the population. Many museums of this nature in the city are free entry, with donations suggested, a clear indication that these histories are not to be placed away, but to be heard, discussed, commemorated and shared. If you are only visiting Riga for a short while I would recommend the Museum of the Occupation of Latvia and the Riga Ghetto and Latvian Holocaust Museum (if you are staying a little longer the 1991 Barricades Museum is also worth a visit). While I am focusing on the second one, I think it is important to start with the Museum of the Occupation of Latvia, as this sets out the cultural context of the time in Latvia.

Sorry if this blog post sounds a bit ‘history lesson’ but it is really important to understand the contexts of Latvia during this period to fully appreciate the immensity of what is presented by the museums! 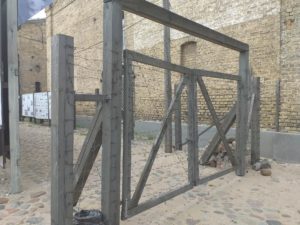 At the point of the German invasion of Latvia in 1941, Latvia had already been under Soviet occupation for the past year. At the outbreak of the war Latvia announced its neutrality. However, following the signing of an illegal treaty by the Germans and the Soviets, Latvia suffered its loss of independence and came under Soviet rule. At the point of the German invasion in in 1941 many Latvian citizens were optimistic about the changes that may come through new leadership. What was not anticipated was the torturous treatment and persecution of Latvian Jews, as anti-Semitism was not widespread within the Soviet Union. 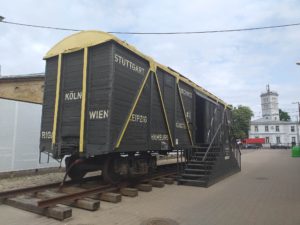 The implementation of the Holocaust in Latvia began immediately after the German occupation in 1941, recorded as being officially completed by the end of the same year (though many thousands of killings and attributed deaths occurred up until the closing of the Riga Ghetto in 1943).  From the point of the occupation in August large groups of Jews were ordered to be shot in Riga and in Daugavpils. Come the autumn, and Jews remaining in Riga were forced into a fenced district in the Moscow suburb of the city, which came to be known as the Riga Ghetto. Through the winter about 25,000 Jews were walked from this Ghetto to the Rumbula Forest on the outskirts of Riga to be shot.

The Riga Ghetto and Latvian Holocaust Museum serves as both a museum and a memorial to this period and those who lost their lives.

The museum has been constructed using materials from the Ghetto and remains frankly honest about the happenings of this time. At the centre of the outdoor museum is ‘The List of Names’, a commemoration of the 70,000 Latvian Jews who perished in Latvia throughout the Holocaust. On the reverse of these boards are the names of those transported from other European cities to the Riga Ghetto. 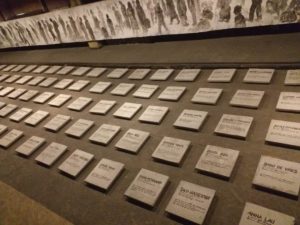 One of the countries with the largest transportation figures to the Riga Ghetto was the Czech Republic. There is a special installation at the museum regarding a group of 230 individuals who were transported from Bremen, Germany to Theresienstadt, Czech Republic and then onto the Riga Ghetto. The installation includes 230 concrete plaques, inscribed with memorials for each of these individuals. It was shocking to learn that Theresienstadt was pitched to German citizens as a luxury resort for those over 65, and as such many of those commemorated in this exhibition voluntarily agreed to go, or even paid to be transported, to their inevitable deaths, thinking they were being taken to a retirement village. 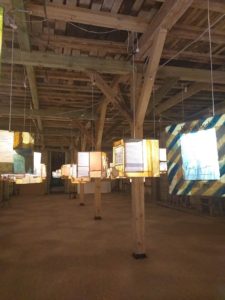 Alongside the concrete plaques are 230 paper lanterns decorated with personal histories of each of the individuals. These include photographs, signatures, letters, testimonials and memories – this only serves to reiterate the human loss of the atrocities. 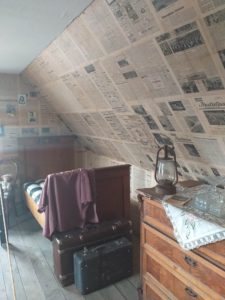 At the far end of the museum sits an unassuming wooden house. The house was once part of the Riga Ghetto, with up to 13 people living in each of its small rooms. The house has been restored by the museum as a testimony for these times. The downstairs houses a series of models of other houses located within the confines of the Ghetto. The upstairs has been decorated to resemble how these houses appeared on the inside. Notable for me was the wallpaper lining the walls. While I can only assume this was for insulation purposes, a poignant remnant of the original house is a charred timber still with pieces of newspaper stuck to it. 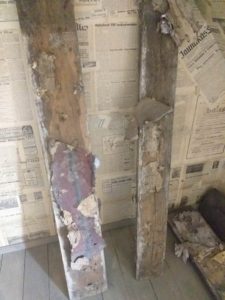 Something that becomes apparent through exhibits at this museum, the Museum of the Occupation of Latvia and the Museum of Jews in Latvia (which we visited on our previous trip) was the number of ‘Jewish Saviours’ that there were within Latvia at this time. The persecution of Latvian Jews was of an unprecedented level. The extensiveness and ruthlessness of these acts evoked empathy within the population, with Latvian Jews widely seen as ‘Latvian Citizens’. Throughout this period Latvian Citizens were able to save over 400 Jews.

Would I recommend? I think if you are in Riga it is essential to visit at least one of the two main museums listed above. My personal choice would be the Museum of the Occupation of Latvia as it provides a comprehensive overview of not just the 1940s, but the whole period of occupation up until Latvia’s re-independence in 1990, though this museum is essential for those with an interest and appreciation for personal histories.

How long do I need? Depending on how much you read the museum should take no longer than 2 hours. Most of the signs are in Latvian, Russian and English. Where there is no information in English, an A4 information sheet is provided to give an overview.

How do I get there? The museum is about a five-minute walk behind the central markets. It is an outdoor museum so consideration should be given in this respect regarding your visit.