While for me Brașov does not have the charm of the other Transylvanian towns we have visited in Romania so far, an undeniable bonus of the city is its close proximity to a number of castles and fortresses. Of these Bran Castle is undeniably the most famous, owing to its supposed association with Dracula. The knowledge that this would be the busiest of the bunch was enough for it to drop down our priority list, and instead we spent our couple of days in the city visiting the Râșnov Fortress and Peleș Castle. 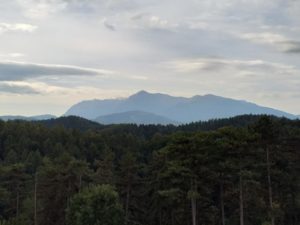 Râșnov Fortress, as the name indicates, is a former citadel located in the Brașov county village of Râșnov. Though by no means a ruin, the fortress is no longer functional in its original capacity, and instead is used for tourism. You can’t go in many of the buildings, though those that are open are operating as small tourist shops. However, you don’t come here to see inside – it is all about the views. Located in the peaks of the Carpathian Mountains, the fortress offers rolling views across the countryside which are not just breath-taking, but also explain its positioning as a defence system as you can truly see for miles. 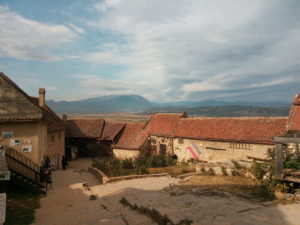 We travelled to Râșnov by train from Brașov. Though not an unpleasant experience, the train network for this route is somewhat infrequent so a bit of pre-planning was most definitely required. Another thing to watch with the trains is Râșnov station as there is no platform meaning there is over a metre step from the carriage to the ground. The journey cost 3.90 lei each, each way, which is really reasonable considering the total journey is around 15 kilometres. 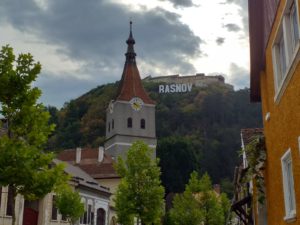 Pulling into the station the fortress is instantly visible, helped in some small part by the large ‘Hollywood’ style lettering beneath it featuring the village’s name. Râșnov is a small place which apparently livens up in the winter season owing to its fantastic skiing. We walked from the station towards the town square, where we had read there was a funicular that took you up to the fortress; you climb up to the fortress as well should you wish but the path is not laid and it looked to be quite a tricky route. 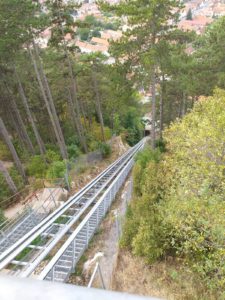 Considering myself, my dad and Dom are all not the biggest fans of heights, it is funny how much we all enjoy a funicular – perhaps the key is just keep looking up. The entrance to the funicular wasn’t the easiest to spot as there were renovations happening in the town square and scaffolding was covering it, though eventually we arrived, passing through a small archway and into an open courtyard. Now, at this point there is a lift for those with limited access, but I would honestly recommend if you feel you need this lift not to proceed to the fortress as at the top it is highly unsuitable with many steps, uneven paving and steep inclines and declines through mud and rubble. The funicular itself was, as most things have been in Romania thus far, basic but functional; though a much-preferred option to walking up. 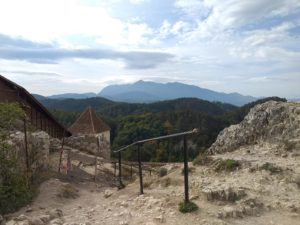 The funicular takes you to an observation deck, from which it is a ten-minute walk to the fortress entrance. This takes you through the outer walls and offers the most spectacular panoramic views. Entrance into the inner fortress is a further 12 lei. You enter the fortress from the back and initially the only views are of the fortress itself, which are suitably impressive though give no context to location. However, once you walk into the old citadel walls the atmosphere becomes electric with spectacular vistas everywhere you look. Though some of the upper level is cordoned off (my guess for this is the fragility of the staircases as they do not look like something you would want to climb) you are free to explore the rest of the citadel at your leisure.

Would I recommend? Most definitely. If you’re history orientated in your interests, I would suggest perhaps reading up on it first as there isn’t too much of this form of information on site. Though for the atmosphere and the views I have honestly not been to anywhere else like this on our trip. Including the funicular and train to Râșnov, the total cost per person was less than 30 lei, which is about £6.

How long do I need? We spent about 1hour 30minutes in the fortress and an additional 30 minutes getting up to it and then back down. There was a four hour wait between trains though, so we had plenty of time to explore the village and stop for some lunch too.

How do I get there? If you go to Râșnov train station the fortress is impossible to miss, though if you are struggling it is signposted from the town square.

The many breweries of Bucharest (and where to find them)

Keeping it local in Sibiu