In preparation for this trip we have been using the Lonely Planet Baltics book to help formulate our route. Despite there being no mention of Valga, we decided to stop there as it is one of the main border towns between Estonia and Latvia – the border runs through the centre of the town. We weren’t expecting there to be a lot of ‘touristy’ things to do (tourist information seemed quite surprised when we walked in!), so instead I had a look into the history of the town before we arrived.

Between 1941 and 1953 there were three prison camps operational in the Prümetsa district of Valga. Today a prison camp cemetery and a memorial site can be found in the Prümetsa area for the two prisoner of war (POW) camps. Despite a mention on the Visit Estonia website, the exact location of these sights was quite hard to obtain, mainly as not too many people had been to them. There was a Tripadvisor review left from last year which gave the longitude and latitude of the location, so armed with a map and a bottle of water we headed off to find them. 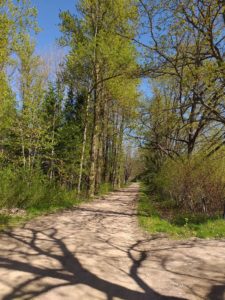 The walk from the centre of Valga towards the cemetery (where we visited first) took around 40 minutes and was fairly easy, all pavements aside from the final 200 metres. Turning onto Roheline Street the road quickly became a single-track path, surrounded on both sides by woodland. The woodland breaks away into a green clearing (Roheline meaning Green in Estonian), and it was here we found the cemetery. 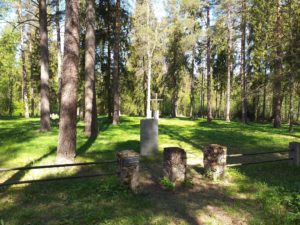 A washed-out information board on the corner confirmed that it is not a maintained area, perhaps why it was quite difficult to locate. While the Estonian side of the board had completely disappeared, there was a sign facing the woods in English that was somewhat legible which gave further information on the three prison camps. Only the final camp is not commemorated in Prümetsa, as it was not a POW camp, instead it was for those found guilty in Russian law who were not physically strong enough for hard labour. This camp was the MVD camp division No 5 (1949 to 1953). 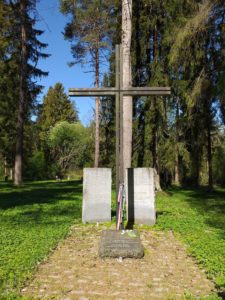 Set back from the road, and visible from the information board was Valga Prison Camp Cemetery. The cemetery commemorates mainly German and Hungarian soldiers who were POW’s at the NKVD Prisoners of War Camp No 28 (1944 to 1949). Most of the prisoners were high ranking army officials, and were utilised to improve the infrastructure of Valga, especially in the building of the town’s railway station. This was the second incarnation of the camp. 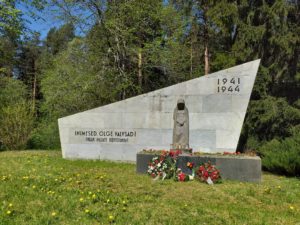 Initially we walked further into the woods in an attempt to find the memorial site, but after 20 minutes of aimless wandering we decided to give up and head back towards town for some lunch. Never ones to go back on ourselves we continued along the road and lo and behold about a 2-minute walk further up Roheline we came across the memorial. A statue titled “Grieving Woman” sits atop a mound of grass overlooking the area of mass graves of the Russian soldiers from the Stalag 351 camp (1941 to 1944), the first incarnation of the camp. This camp was maintained by the German military and imprisoned Russian soldiers. Unlike other German prison camps of the time, no mass executions occurred at Stalag 351. However, during its operation around 29,000 inmates are said to have lost their lives through either malnutrition or by freezing to death.

Would I recommend? I don’t think I would travel to Valga specially to visit these areas, but if you are passing through Valga it is definitely worth setting aside some time to visit. I found it odd it was not listed amongst the recommended historical sights given at tourist information, as it was the best of what I have seen here.

How long do I need? It took a few hours, though we did walk there and back (street parking is available on Roheline). The sights themselves would take no more than 30 minutes, though it was nice to take some time and sit and reflect on what we had seen.

How do I get there? This was not the easiest place to get to, especially as Maps seems a little off in its directions (it will tell you to go to a middle of a field, but this field is thick woodland and does not exist!). We went up J. Kuperjanovi, out of the town and turned left onto Roheline. The cemetery is down a dirt track though fully visible from the road. To get to the memorial go back to Roheline and continue for about 100 metres. If you continue on Roheline further it will return you to Pikk.