I hadn’t originally intended to write about anything in Tartu. Tartu is one of the major university towns in Estonia, and aside from its academic prowess and associated architecture, it was meant to be a break for us after a hectic week in the capital. What we didn’t plan is a long weekend of solid rain, which meant that rather than fully exploring the architecture we ended up at a number of the city’s museums. It was after a visit to the Museum of Paper and Printing I decided I had to write about this museum; our visit here was determined by the weather, but for anyone thinking about future trips to the city I think this is a must visit.

The museum’s building is rather unassuming and from the road I did question whether this was the right place as it appeared more like a scrap yard. There are however some helpful signs which take you about 100m from the road to the museum. 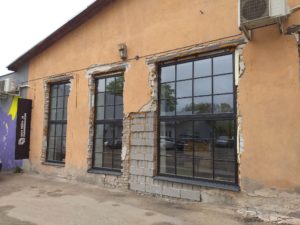 The museum itself is in two parts, the Museum of Paper and the Museum of Printing: it was by complete coincidence that the two ended up being housed in the same building, an irony that I think had not escaped those who worked there. Visitors can pay €8 for a guided tour of both museums (similar to Hotel Viru in Tallinn entry is conditional on being accompanied).

The tour begins in the paper part of the museum. Our initial guide Lea, went through the history and the development of paper from 2000 years ago to modern methods today. As well as being a museum, both also function as active studios and there are worked examples of their most recent, most creative and most successful paper pulps. These ranged from papers made of parsley and rhubarb, to some made of denim jeans. 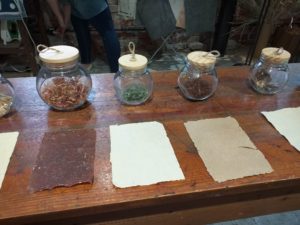 After a quick change of guide to Mirjam (Lea was recruited to lead a school group who had arrived just after us), we were asked if we wanted to have a go at making our own paper. There was a choice of four pulps; we opted for sunflower leaf and tea. This process was really hands on, with Dom aligning the frame, dunking the frame in the pulp, offsetting the water using felt and then finally pressing the final sheet of paper using a vice. Once this had been completed Mirjam ironed the sheet to remove excess water and strengthen the paper, it was here we learnt that the heat limit of paper is 451 Fahrenheit – just like the book said! 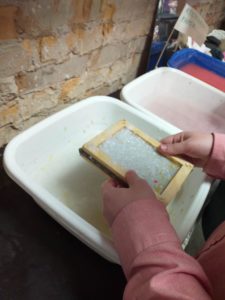 The print part of the museum was slightly larger and included at least eight major printing presses. During this area we were able to use a Gutenberg Press to print onto our piece of paper. I took charge of this, opting for an umbrella motif in a jazzy yellow. 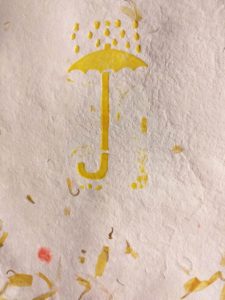 However, my highlight of this part of the museum was the book printing process, demonstrated by Mirjam, through the museum’s recent publication and printing of The Little Prince. They had printed 250 copies in the Estonian language using all the original print presses and hand bookbinding. The sentence mould was one of the most impressive pieces of kit I had seen, melting metal and then pouring it against a line of indented metal shards to form sentences. These were then lined up to print full pages of text, which were inserted in 16 plates ready to be printed into the books. 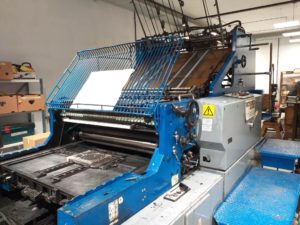 The binding of the books also takes place here, and is hand stitched using a weaving machine. A comical point of note was that sometimes during this process the pages of the book remain attached from the printing machine and have forgotten to be cut; our guide noted that of course during the Soviet era this was not a mistake but made for an extremely rare and valuable edition of the book. 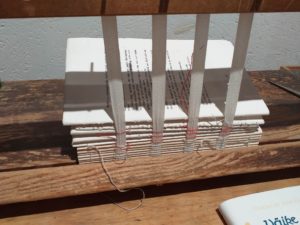 Once the tour was over we were encouraged to look around all the many, many cases of the printing blocks – reassured that they had been tested a few months prior and the lead was non-harmful! Attached to the museum was also a Lino Print exhibition, which was fantastic. Dom had never seen this form of printing before so it was really nice to be able to introduce him to it, especially as I’d grown up doing it in the kitchen with my mum so actually knew some information on the methods!

Would I recommend? 100% yes. It was really interactive and even if you’re not interested in printing and paper specifically, the processes are amazing and their shop with their recycled projects is genuinely really impressive.

How long do I need? The tours last an hour, but we spent about two once we had also viewed the Lino exhibit and marveled at about 1000 print blocks.

How do I get there? From the old town it is about a 20 minute walk, in the direction of the railway station. We walked up through the back of the university which had some additional sights on the way and was pretty scenic.