Prior to our arrival in a city myself and Dom put some time aside to work out our ‘cultural agenda’ for the duration of our stay. For every bar or brewery that Dom recommends, I attempt to find an exhibition or museum to even up the plans. My personal interest is in 20th Century European History, and so I tend to gravitate to exhibitions of this nature where possible. 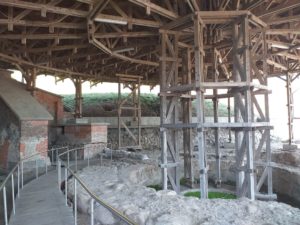 Attempting to find the museum was not as straightforward as I had anticipated. I was, maybe naively, looking out for a massive castle as a guide point, however Klaipėda Castle was destroyed in the 19th century and is now an archaeological site. Each of the museum’s exhibitions are located in the old castle tunnels and are well signposted once you are within the main grounds. 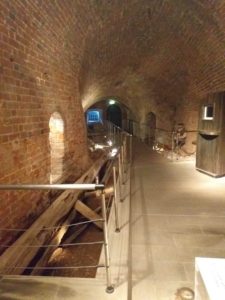 Museum 39/45 is in the east tunnel and comprises of four rooms. Room 1, named Klaipėda on the eve of the war, details the handing over of the Klaipėda region to Germany in 1939. Germany had initially threatened to use force in their attempted occupation of Lithuania, however presented an ultimatum on 20 March 1939 to transfer Klaipėda to them. This agreement was signed two days later, with a copy of this document in the museum. What I took most from this first room was how surprised and upset Lithuanian people were that this agreement had been signed. Between 22 March and 23 March 1939 approximately 18,000 Lithuanians left the Klaipėda region. 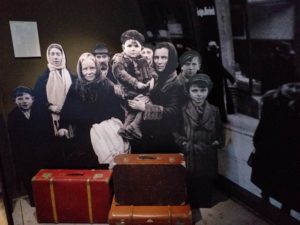 Room 2, Klaipėda Assault, is a no holds barred depiction of the continuous assaults and attacks on the city during 1944. The whole museum is extremely visual and was quite surprising in its use of technology to bring the history to life. In the centre of room 2 was a large table with a projection of the layout of Klaipėda on it. Over the top of this further projections were layered showing the number of attacks, their frequency and the levels of the destruction caused by each specific attack. After a 115-day siege on the city the Soviet Army entered Klaipėda in January 1945. At this point around 60% of the city’s buildings had been destroyed. A memorable figure from this room was from the memoirs of Victor Berg, the first chairman of the Klaipėda executive committee, which stated that in the first registration following the Soviet occupation of the city only 28 residents were found in the city. 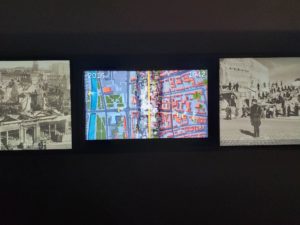 Room 3, Klaipėda after war, presents an especially poignant picture of Klaipėda immediately after the war had ended. The room is saturated in photos of a destroyed and deserted city. This room begins to show the immediate impact that Soviet occupation had on the city. From the point of 28 residents by 1946 Klaipėda had 30,000 new residents, many coming from various parts of Russia. These, alongside German prisoners of war, started to clear and rebuild the city under new Soviet ideologies, celebrations and traditions. 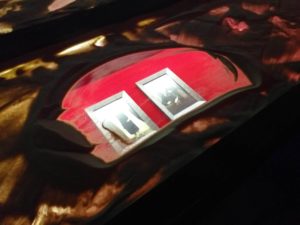 The final room of the museum, Memory Hall, was simple in its presentation yet one of the most poignant. In the centre of the room was a carriage of about 6 metres, covered in sand. If you moved the sand to one side, beneath it lies ordinary household items that once belonged to the Klaipėda residents which had been brought back to Lithuania from Siberia after 1953 by those who had been sent there in exile. These included crockery, clothing, photographs and jewellery amongst other things. On the walls of the room’s statistics of the person impact of World War Two were projected. These focused on the impact of Jewish people, civilians, soldiers and specifically in Klaipėda, where throughout the war 140,000 civilians were either killed or deported. This equates to 92.6% of the region’s population.

Would I recommend? Visiting these regional museums has been a highlight of my trip as it demonstrates the levels of impact to not just civilians but city infrastructure to the present day. Museum 39/45 is not only one of the more poignant museums we have visited, but its use of technology in its presentation is brilliant.

How long do I need? The Museum 39/45 exhibition took us just over an hour. We probably spent the same amount of time visiting the other exhibitions in the museum after. Do be aware though that Museum 39/45 is the only exhibition of the four to include English translations, so the others are maybe better positioned for just looking.

How do I get there? The best route to the museum is to cross Pilies Street at the point of the Theatre. Once you are at the port it is signposted.