Lots of fun with Unicum!

We’ve done a number of breweries on our trip so far, but Budapest offered our first opportunity for a distillery tour. The Zwack company, based in the city, is the sole producer of Unicum, a Hungarian icon. Unicum is a herbal liqueur distilled over a blend of 40 different herbs and spices, then aged for 6 months in oak casks. This drink is everywhere in Hungary, and while like most herbal liqueurs it started its life as a medical ointment, it is now drunk nationally as an aperitif, digestif or a shot.  I’m not opposed to herbal liqueurs, in fact the element of a jagerbomb I can’t stand is the energy drink, so we headed out with open minds and a curiosity of what we would find. 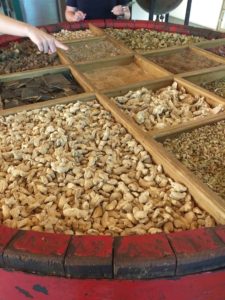 Like many distilleries of this type, the Zwack company is a family business, with descendants of the family overseeing manufacture of the Unicum throughout its production lifetime (with the exception of post-World War Two, though I’ll come onto that). Unicum is undeniably the most successful output of the company, having been sold and produced in Hungary for over 130 years. Despite being officially registered in 1883, the original recipe of the drink dates back to 1790. It is said the drink was developed by Dr Zwack, Royal Physician to the Imperial Court Joseph II, Holy Roman Emperor and King of Hungary. As treatment for indigestion, Dr Zwack offered the monarch a sip of his exclusive recipe potion as a cure for this ailment. Apparently, the response of the monarch was ‘Dr Zwack, das ist ein Unicum!’; and this is how the spirit got its name. Now, I’ve done a bit of searching and what exactly an ‘ein Unicum’ is remains a mystery to me but having tasted the drink now myself I can only assume it means a blooming bitter drink. 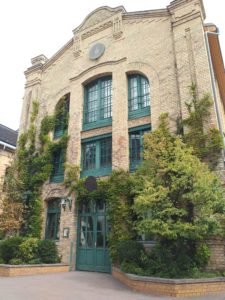 Despite the Unicum epiphany taking place in 1790, it was another fifty years until the business of Unicum began being established. Jozsef Zwack founded the first Zwack company in 1840, producing the liquid according to the original recipe of his ancestor Dr Zwack. Another forty years passed until it was registered as a herbal liqueur, and a further ten years until the premises were established on the banks of the Danube. These premises remain the headquarters of Zwack Unicum today. As luck would have it, our hostel was located at the end of the next street, so as any sensible people would, we booked onto an early morning tour of the distillery – 10am on a Monday morning seemed as good a time as any to sample 40% liqueurs. Initially it was just the two of us, though we were later joined by two Italian women for the tasting of the liqueurs. 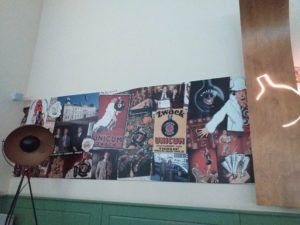 Our tour began with a film screening documenting the history of the Zwack company from 1790 until the mid-2010s. To describe the film as quirky would be an understatement. It combined elements of film noir with British sitcom and made for a highly entertaining and surprisingly informative experience. The film, in particular, further explored the disarray the company was thrust into during the 20th century. While World War Two and the rise of communist had a massive part to play in this, closer to home the simmering tensions between brother Béla and János Zwack (who were operating the company at this time) equally contributed to the tensions. The brothers did not get on, to the point where in the film it mentions that they had separate offices with a lawyer’s office between them and would not communicate with each other, even to say good morning, without it going through the lawyers.

During World War Two the distillery was completely destroyed and following the end of the war it became nationalised property under the Communist regime. During this period only Béla Zwack remained in Hungary, with the rest of the family fleeing to America and taking the original recipe with them. In its place a fake recipe was left which was used as a base for the Communist production of Unicum. Béla was later able to escape to Italy where he started distilling Unicum under the original family recipe. Later his nephew, Péter Zwack, took on his uncle’s role. Péter Zwack himself, and his two children, are sole operators of the company today. It was Péter who was instrumental in bringing the production of Unicum back to Hungary and reviving the Zwack company, though his legacy in international relations extended further as he was also the first Hungarian ambassador to the United States. Unicum is a serious business. 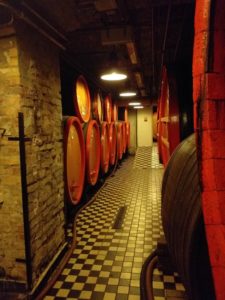 Following the fall of Communism in 1989, the family chose to return to Hungary with the original Unicum recipe. They purchased their company back from the state and began producing Unicum in its original form and location. Following the film, we were then taken to the original distilling house of the Zwack company. Here there are hundreds of glass jars filled with an array of different herbs and spices. Our guide was very clear that these are only here as examples of what the recipe might include, as the original recipe is still only known by the Zwack family members. After smelling nearly all the jars, we were led downstairs to the cellars of the distilling hall where the oak barrels are stored. There are hundreds of barrels down in the cellar, though sadly only one of the original barrels from the 1930s survived World War One. As well as being the only one from this time, it stands out for another reason in that it was the largest in the cellar with a capacity of 17,000 litres. 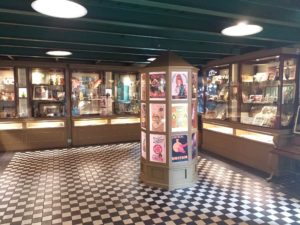 A little deeper in the cellar came the most important element of the tour, the tasting. Notable with the barrels is the two different colours of rim, with the majority being red and some being gold. This helps distinguish between the two main Unicum offerings, classic Unicum (red) and Unicum Szilva [plum] (gold). A healthy serving of each was poured, about a triple English single measure, and the tasting began. The original Unicum was really bitter, more so than I was anticipating, though after a short time in the mouth you could taste a number of the spices: cardamom is definitely one of the 40! The plum version is a lot smoother and sweeter, matured as normal in the red casks, then added to the gold casks where it is aged for a further 6 months over a bed of dried plums. I preferred the plum version, though the original was better for Dom. As the servings were pretty huge, our tour guide recommended not to down them but instead take them with us into the final bit of the tour, the museum. 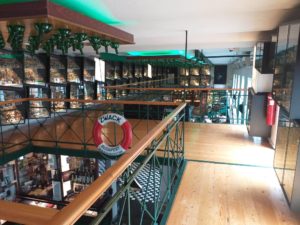 The Unicum museum is a marvel if only for being a testament to the will of a family to keep every single relic, postcard, written letter etc that has been in their possession. The museum in great detail, and with numerous further artefacts, goes through the history of not just Unicum, but the Zwack family and their associates. It also chronicles the history of the iconic Unicum bottle, a medicinal style round bottom glass with the symbolic gold cross on it. Originally the gold cross was red, though for this to be used a generous donation was required to the pension fund of the Red Cross. After 1922 the family chose to cut this connection and began to use a gold cross on their bottles. A highlight of the museum for me was the second floor which housed the largest global collection of miniatures. With over 17,000 in the collection it was mind-blowing to walk around and have a look at all these liqueurs from all over the world – just in tiny versions of themselves!

Would I recommend? I really would, even if you are not a massive fan of the drink itself. It’s a fascinating personal family story, and the tour and the museum manage to tell it in an engaging way.

How long do I need? The tour didn’t last too long. The film was 20 minutes, with a further 20 minutes for the tasting and distillery room. You are free to take as long as you need for the museum at the end, though to be honest after our two drinks we weren’t in a reading mood, instead just looking at the pictures and artefacts!

How do I get there? The distillery is located in the south of the city on Dandár overlooking the Danube. It is a little way out of the city centre, though if you are heading down that way why not make a day of it by also visiting the thermal baths on Dandár.