Luck has really been on our side during this trip when it comes to beer festivals; three times now we’ve arrived somewhere to find one taking place. The pleasant surprise this time was Lotny Festiwal Piwa (“Flying Beer Festival”) at the Polish National Stadium in Warsaw. Apparently the festival travels around Poland, mainly the smaller cities, and this was its first time in the capital. We would have been blissfully unaware of the festival had our free tour guide not mentioned it was taking place. Of course, once we knew it was there, we couldn’t resist! 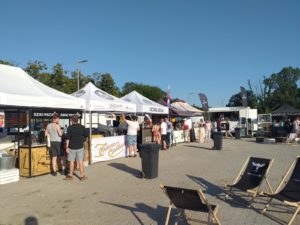 We were already heading over to the stadium side of the river for a visit to the Vodka Museum, so we decided to pop down to the festival after that. I know, vodka then beer – sounds like a great afternoon, right? We got off the bus at the stadium to find a decent-sized festival setup; about 20 breweries from around Poland, plus a few food stalls. There was plenty of seating too although the 300 or so punters were battling for the benches in the shade, desperately seeking shelter from the sweltering 35°C heat.

Of the 20 breweries, there were quite a few names new to us alongside a couple we’d seen before. Some, like Browar Brodacz, we recognised from previous trips to Poland; others, such as Funky Fluid, we’d seen in the local pubs a couple of nights earlier! Poppy noted that the styles currently in vogue over here reminded her of the UK craft beer scene a couple of years back; sours are really popular at the moment, while barrel-aged beer seems to be coming into fashion too. 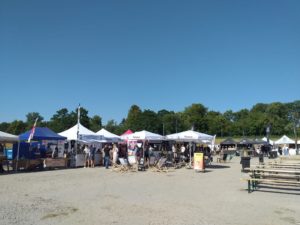 Rather than listing all the beers we sampled, I’ve chosen my top 3 of the festival. Beer Matters readers might notice the similarity to my old Dom’s Casks of the Month column, but unlike in the magazine where the beers were in no particular order, I’ve decided to rank these ones.

It can be rare these days to find a beer that actually tastes of beer, without any additions. However, this excellent Double IPA was one of those beers that did exactly what it said on the tin. 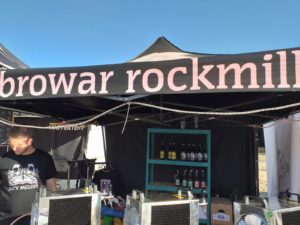 It had the classic DIPA haze in the glass, alongside a tempting aroma; hints of caramel from the malt mingled with citrus and tropical fruit notes from the ample hops. The taste was similar, a juicy start giving way to a slightly bitter, hoppy finish. A very good example of the style.

I’ve seen sour beers with almost every fruit imaginable, but I think this was the first time I’d tried one brewed with kiwi. I wasn’t sure whether the combination would work, but I think it’s safe to say that it did. 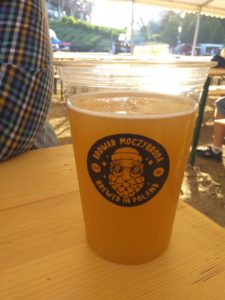 This one didn’t particularly look like a sour in the glass, with its cloudy golden colour, but you could really smell the kiwis. On tasting, it was just the right level of sourness to be refreshing, perfect on such a hot day. The festival judges evidently enjoyed it too as they awarded it beer of the festival!

Coconut isn’t for everyone, and even for those who do enjoy it there’s such a fine line to avoid it being overpowering. These brewers, who only started last year, got that balance exactly right in this exquisite chocolate coconut milk stout. 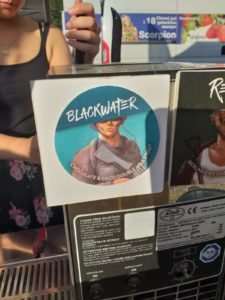 Dark black and silky smooth, the combination of lactose sweetness and roasted malt bitterness combined beautifully with the chocolate and coconut to create Bounty-in-a-glass goodness. An early contender for my beer of Poland here!