As we came to the end of the Estonian leg of our trip, we decided that we should probably drink up some of the bottles we’d collected over the past three weeks or so (it also meant we wouldn’t have to carry them around any longer!). We took advantage of a quiet evening in Võru to sample five of the beers we’d compiled and thought it might be fun to turn it into a bit of a competition. This has led to our new column, with the very catchy and snazzy title, Enjoying our Bottles to Empty our Bags, or EB2EB – the ‘ours’ are silent as this column is all about the beer not us… As you can tell we were struggling a bit to think of a title so suggestions for a better one on a postcard please!

The beers (technically four beers and a mead) themselves were a good mixture of what Estonia has to offer, from big brand names such as A. Le Coq that we picked up during our brewery tour to newcomers on the scene like Käbliku. We also had a good range of styles, from classic lagers to barrel-aged imperial stouts. Obviously by now you’re dying to know who won, so without further ado here are our thoughts on all five bottles: 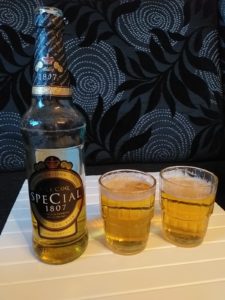 Poppy: It is quite light for a European style lager, but it still has a malty smell which is promising. The beer is not overly fizzy (which is good for me!) and tastes pretty much as I was expecting.
Did you like it? Yes I did, I do quite like a lager and much prefer the European styles over British ones.
Would you have it again? Yes, it was only €1.50 for a 500ml bottle which is a bargain for a very drinkable beer.
Score: 6/10

Dom: Well, it looks like a lager although not as fizzy as I expected. The aroma is a classic malty lager but the taste is a bit sweeter than I thought it might be, still fairly refreshing though.
Did you like it? Lager isn’t my favourite style but I’ve had far worse.
Would you have it again? Probably not to be honest.
Score: 5/10 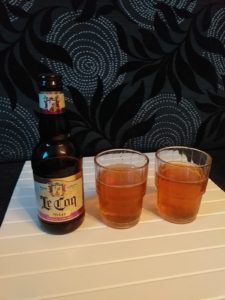 Poppy: The colour is typical of Belgian style beers, though this one on pour was quite lucid. While I can see where they were trying to go through the aftertaste, the smell and the overall taste of the beer were too watered down.
Did you like it? Not really, for a 6% beer it tastes too watered down.
Would you have it again? Probably not.
Score: 3/10

Dom: It looks the right colour, maybe a bit hazier but it smells of nothing at all. The taste isn’t much better, to be honest I was expecting a lot more from this beer.
Did you like it? No.
Would you have it again? Not even at the €1 a bottle it cost.
Score: 3/10 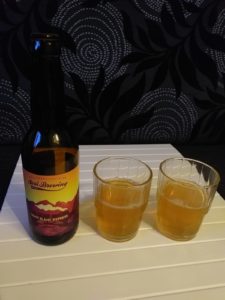 Poppy: The beer itself smells lovely, slightly citric and has a good glow as I would expect from a wheat ale. Surprisingly hoppy for a wheat ale, almost like a wheat IPA, with quite a tart after taste, which I personally liked.
Did you like it? Yes, though slightly hoppier than I’d normally go for, it was really good.
Would you have it again? Although I enjoyed it I would probably not have it again, as there are other Sori brews that are priced similarly that I’d prefer to drink above this one.
Score: 7/10

Dom: It’s got that classic wheat beer haze, smells a lot hoppier than I expected with a lot of tropical fruit and citrus coming through but you can still just about get the wheat. The taste is very hop forward, not much wheatiness at all but very refreshing.
Did you like it? Yes, even though it’s not really like a wheat beer, but still a very enjoyable pale.
Would you have it again? Maybe on a hot summer’s day, I can imagine this would be the perfect cooler.
Score: 7/10 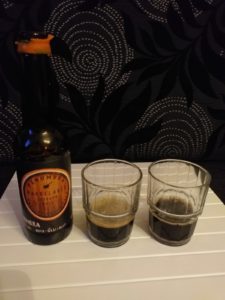 Poppy: It’s a stout and its dark so looks exactly how I was expecting! It has the undeniable smell of a drink you know will get you smashed. It tastes so incredibly strong of peat that nothing else came through for me, and I even tried it three times to be sure.
Did you like it? No, it was far too strong a whisky taste for me that it took away from the actual beer.
Would you have it again? No. It came in a bottle with a wax seal so guessing it is quite important, but I’ve tried it once and that’s enough for me.
Score: 4/10

Dom: Dark black colour with the slightest hint of a head. You can really smell the Laphraoig, the peat is overtaking everything else. Similarly on tasting the whisky comes through very strongly, a hint of sweetness from the beer itself but mainly just getting peat.
Did you like it? I think so, but I don’t think I’d want too much of it!
Would you have it again? At more than €7 a bottle and over 12%, absolutely not.
Score: 7/10 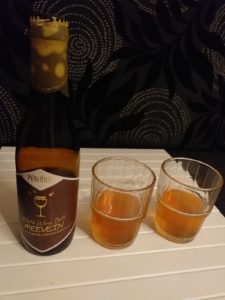 Poppy: Has a nice amber tone, and quite a strong acidic smell, presumably coming from the white wine. It is extremely smooth tasting and has a subtle sweetness. The white wine taste really takes over the drink, making it taste like a dry chardonnay in some aspects, but it doesn’t overpower it to the point where it is not recognisable as a mead.
Did you like it? Yes, rather surprisingly, but I found it a really pleasant drink and I enjoyed the additional tone that the wine barrels brought.
Would you have it again? Probably not, as although I found it very drinkable, at 14.5% it should probably be a ‘one off’ beer for me.
Score: 8/10

Dom: It looks more orange than I expected! The aroma is unmistakably white wine, but you get the sweetness from the mead too plus some vanilla and oranges coming through. On tasting it starts off like a sweet dry wine (if that makes sense – it’s definitely not a sweet wine), which gives way to some spicy notes at the end.
Did you like it? I did, yes.
Would you have it again? You know what, I think I would. Maybe only one more at this strength though!
Score: 8/10

So, unexpectedly the winner was the mead! It was a really enjoyable drink, although at 14.5% it was definitely one to savour. We’ll be back with another bottle tasting competition once we’ve restored our stash in Latvia, so stay tuned…

Hello world from me too!