While I may not have reached full ‘grown-up’ status just yet, if I have taken anything from the process in getting there so far, it is that as we mature the role of creative play in our life changes. Creative play as an adult is a means of self-expression, social commentary and development of the subject rather than the self. There is a desire to formalise play and to distance yourself from it to achieve maturity (this coming from a 25-year-old who still gets a Lego set from Santa each year). But yet, there are small windows off opportunity, given through nostalgia, which create safe spaces where pure joy can be obtained for a short while, removed from the realities of all else. I realise this is starting to sound like I’m re-writing my Master’s thesis so I’ll get on with telling you what has triggered these observations: Doll Houses. 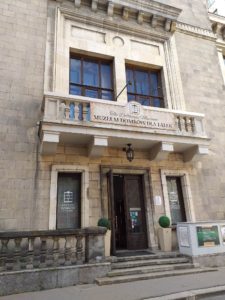 We were not aware of the Doll House Museum before we arrived in the capital, with myself only becoming aware of its existence by walking past.  I was instantly drawn in by the utter irony of a little sanctuary of imagination being housed inside the Palace of Science and Culture. When I was younger, I used to have the most beautiful four roomed doll house and would sit for hours inventing worlds within its four walls. Nostalgia, for me, hit hard and this museum was put on my must visit list for our time in Warsaw. 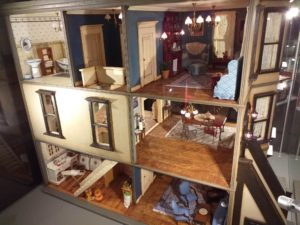 While a few reviews online noted that the museum was a children’s dream, when we arrived it was the complete opposite. The museum had been designed for grown-ups, and this was no more evident with how you entered the museum – through magic of course. The premise was that magic would transport you to the magical world. While I won’t give away the secret, what I can say is that myself and Dom both managed to fit through at the same time, proof if ever needed that the museum is for grown-ups! 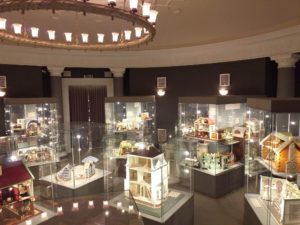 The museum comprises of a central collection of doll houses as well as an exhibit dedicated to religious iconography and doll houses, and a special exhibition, Beyond the Basilisk, which documents the 12 legends of Warsaw with accompanying miniatures. As with many specialist museums, this one began from the private collection of one individual, and then once made public began to grow through international contributions and donations. The individual here was Aneta Popiel-Machnicka who bought a wooden doll house for her daughter Róża, and then from the 1950s onwards began to completely renovate it. 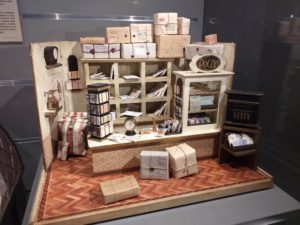 The displays in the main hall of the museum are divided by themes such as education, construction and goods and services: the latter display theme was my favourite. In the goods and services display case there was reconstruction of a Post Office, complete with tiny stamps, postcards, parcels and post-box. The detail that goes into constructions like this is incomprehensible, from the address written on the parcels to the tiny parquet flooring. The largest exhibition in this display was a Bridal Boutique, complete with hand sewn lace dresses, corsets, hat boxes and photo albums with little photos in. The intricacy of these creations is immense and with stools located around the room you and literally sit and look at them, taking in every minute detail. 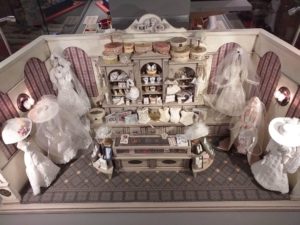 While most of the museum is primarily designed for looking, the temporary exhibition, Beyond the Basilisk, is most certainly designed for learning. The exhibition presents the 12 legends and myths of the city alongside miniatures symbolising each one. These themselves were impressive made of everything from clay to silver and Lego figures. My favourite legend was the one of how Warsaw got its name, through the twins Wars and Sawa. Legend says that while King Kazimierz was travelling along the ancient waterway, he grew hungry and tired and so stopped at a fisherman’s house in search of hospitality. The fisherman and his wife were not aware of the King’s identity and yet still fed and rested him. The fisherman complained that their new-born twins were unable to be christened as the priest was too busy to come to this small village. Hearing this the King decided he must reward these people who welcomed him with kindness and returned two months later with a priest and a feast for the christening of the twins, named Wars and Sawa. Many years later a town was built on the site where the fisherman and his family once lived, and in their honour was named Warsaw. 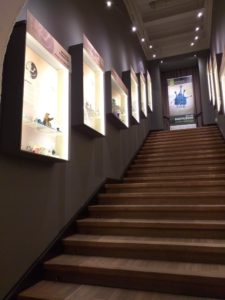 What I loved about the museum the most was the nostalgia it evoked, with me walking around recounting my own stories and memories of how me and my sister used to play with our doll houses, or how I would make and paint my own furniture sets. I was concerned that this same sense of nostalgia would not be evoked for Dom, who unlike me, had not had a doll house growing up. We spoke after the visit to the museum about this and while the nostalgia element was not the same the enjoyment taken from it was, as he enjoyed the opportunity to see these imaginary worlds. He also highlighted how impressive he had found the overall craftsmanship from the hand-sewn beddings, to the furniture and even wallpapering and carpeting of the rooms. 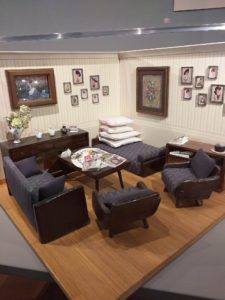 Would I recommend? Yes, while this museum was not one we had intended to visit, I am so glad we spotted it in passing. I have never been to a museum like this before, or indeed think I will see one like this on the rest of our travels.

How long do I need? I would say no more than an hour, and it’s right next to Warsaw Central Station so may be a good option if you’re looking for something to do before a train.

How do I get there? The building can be found in the courtyard to the back of the Tourist Information Building in the Palace of Science and Culture.