When we first started looking into the beer scene of Belgrade, our plans were expanding at an exponential rate as to where we had to go and what we had to try. However, in planning our beer-scapades around the city there was one thing we hadn’t considered; just how brilliant Novi Sad would be. Having spent the entire weekend in Novi Sad either at a beer festival or at a bar we both arrived into Belgrade feeling a little fragile, and quite in need of a few days off. Still wanting to explore the beer scene in some way, we decided to go in a different direction to what we have done before and explore the bottle shops of the city in the hope of picking up some great finds to take forward to our next stop Subotica. 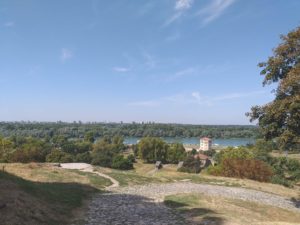 Now, when reading my summaries of the bottle shops below there are some things it is useful to keep in mind. Firstly, I do not recommend visiting these all on the same day. Public transport is not the most reliable in Belgrade and the walking distance between them though manageable, is quite ridiculous. We visited the four shops across three days and fit them into our other plans where possible; with the exception of Pivopija and Beerville which we set aside an afternoon to visit as they are both in New Belgrade (the entire walk took three hours). Also, if you are looking for additional bottle shops online double check they are open and they are a bottle shop in the right capacity. We had one instance where we walked 2 kilometres to a shop which said it was open online to find while the premises still remained it was now an online only shop, and another which was a bottle shop but in the capacity where you could buy a takeaway bottle to be filled from draught.

All the four below come with my sincere recommendations, though do be aware of location before heading out to find them. Sometimes when you are spending an extended time in a city it is useful to know where to buy good craft beer to enjoy in your apartment or hostel (where permitted!). 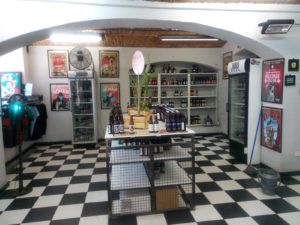 The most centrally located of the bottle shops we visited, 300 Cuda doesn’t just have beer on offer but also a large range of comics. We arrived very shortly after opening and the assistant was busy stocking shelves. Despite this she was really helpful and showed us to the area where the Serbian breweries were located. The shop had the largest range of international bottles of the four, but because of this its Serbian selection is limited to the bigger named breweries (Dogma, 3Bir, Kabinet etc). Saying that though, there was a wide range from these breweries, and we opted to try Plutonium from Dogma, a beer we had not yet come across. The beer was 295 dinar, which was exceptional value especially given the strength of the brew and central location of the shop. There is nowhere to sit and drink in the shop, but the assistant did recommend us a bar not 2 minutes away which was noteworthy with a large number of taps, Samo Pivo. 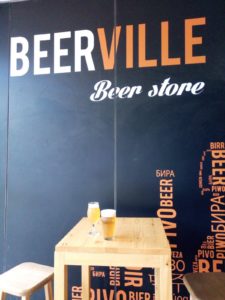 Beerville for me is a bit of a difficult one. While staying in Belgrade we were staying in the London area of the city. In hindsight, the shop didn’t quite offer enough to justify the 6 kilometre walk but saying that it was one of the shops which I enjoyed the most. Located in the bottom of a residential complex, Belville (the name of the shop being a clever play on this), Beerville offers a small range of bottles, exclusively from Serbian breweries, as well as up to five beers on draught. There is a table with chairs inside the shop, and a further two outside. While we were there myself and Dom had a Pale Ale and a NEIPA on draught and we also purchased a bottle of Dirigent, Academia Brewery to take away. The total was around 790 dinar for all three. The assistant spoke English and was really helpful in going through the taps and telling us about each beer (there wasn’t a board inside with them on). The range of bottles included the big names, but also had a number of smaller breweries from other regions of the country which we had not encountered before. 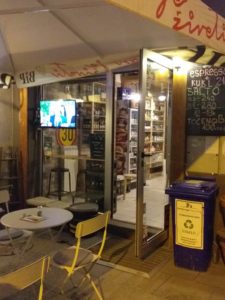 This shop was the one located closest to where we were staying, and as such we decided to pop in on our way to get some tea. Owing to this we didn’t stay to drink, though there were two beers on draught and a number of tables both in and outside where you could drink bottle purchases too. The shop is handily (?) located right next door to the police station so is quite easy to find. There is a 50:50 split between Serbian breweries and international breweries represented in their bottle range. I opted for Shake by 3Bir, which was (from my memory) a reasonable 280 dinar. I think if we would have had an extra day we probably would have revisited here as the outdoor seating area was very quaint, the assistant was really helpful and the range, though not the largest, had some really intriguing looking beers from a large number of breweries. 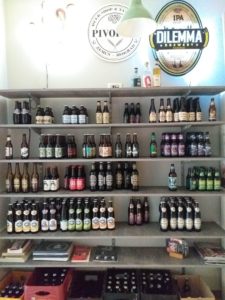 After having walked a fair distance in the morning to a bottle shop to find it was closed, we were both holding out hope for Pivopija being decent. Luckily for us it was a lovely little find. While there was a range of bottles available for purchase, when we were there it was fairly low-stocked. We purchased the Gecko APA, part of the Lizard series by Crow Brewery, the only one of the three we had yet to try. The highlight of the shop though is its small outdoor terrace overlooking the street beneath. There are also three taps, all of which were serving local beers at the time of our visit. We both had a beer in the shop; with the bottle to take away as well our total was around 750 dinar. The assistant didn’t speak a lot of English but was really helpful and brought our beers out to us once they were poured. There was also free Wi-Fi which was a bonus as our data is not covered outside the EU!

Nothing bad about Novi Sad