By Poppy Hayhurst on Wednesday, September 25, 2019

Throughout our travels it has been interesting to see the various currencies used in the different countries. While most countries admittedly use the Euro, a number – especially in central Europe – continue to operate in the traditional currency. In Serbia the currency used today is the dinar; the dinar has been operational in Serbia through four primary periods since the early 13th century. As expected the changes in the currency have sat directly alongside the geographical and political changes to the country over this period. Today the third modern Serbian dinar is used, though the complex history is exquisitely represented in the museum situated within, and operated by, the National Bank of Serbia. 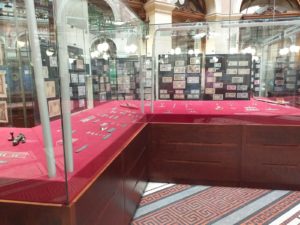 We had heard about the bank exhibition during our free walking tour, and were initially drawn in by the promise of a free bank note printed with our faces on, which I feel is the main purpose of the majority of visitors. We were advised the entire exhibition would take no longer than ten minutes to look around, yet found ourselves there for ages completely engrossed in everything that the bank had so generously compiled for public consumption, viewing and information. Entrance to the exhibition is free, though as it is located within the bank we were both required to leave our passports as collateral. In exchange for your passport you receive an ID card which allows you access to the upper corridor, from which the exhibition is located in a side room. 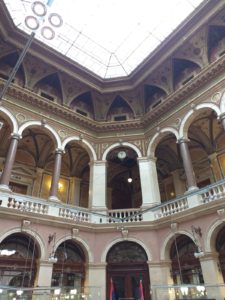 On first arrival the scale of the room is breathtaking; not so much for its size than its height. Your eye is immediately drawn to the roof which is completely made of glass panels. A representative from the bank greeted us and immediately took us to the money printing station. This is the gimmick of the place, and the reason many tourists come to visit – in fact while we were visiting at least three other groups came for this specifically and then left without further exploring the exhibition. You are asked to sit on a velvet chair where an image is taken of your head and transferred onto a bank note. There is no cost for this and the results are surprisingly realistic so I can see why this element draws in the crowds. 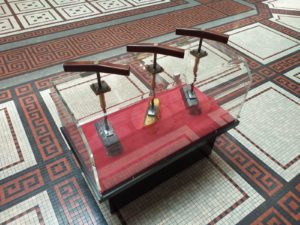 Now the proud owners of our own bank notes, it seemed apt to learn more about the Serbian ones. The exhibition hosts a number of artifacts including a safe filled with gold bullion, a weight machine allowing you to test the weight of gold against other metals such as steel, medals and original furniture from the bank. The previous purpose of this room is especially telling as they have cleverly installed information boards in each of the former counters. 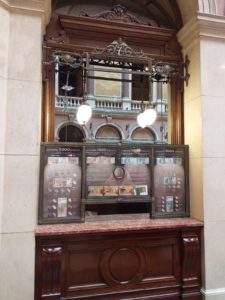 Even with all of these though the arguable highlight of the exhibition is the coin and notes exhibition which represents a complete history of Serbian currency through the antique period, to medieval and up to modern-day. Historically Serbia holds the third highest hyperinflation rates of any country globally (Hungary is first, then Zimbabwe). The collection includes notes from this period, when Yugoslavia broke up, dinar notes representing amounts up to the millions. 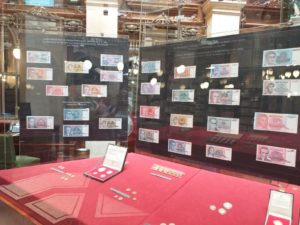 My highlight of the exhibition was the wall dedicated to the expansion of public knowledge on counterfeit currency. When the Bank of Serbia opened this exhibition space in 2004 it was intended to be, amongst other things, a space for education and raising public awareness. One of the ways in which it fulfils this is through its comprehensive exhibits on the forged currency market, including how to spot forged notes and what to do with them should one come into your possession. Even though the examples were dinars they provided really useful tips that I think would not go unappreciated as basic knowledge for everyone: look, feel, tilt.

Would I recommend? I don’t think I’d go to Belgrade solely to visit this museum, but if you are there and have some spare time it is really worth a trip if not just to see the old bank and get your own notes printed.

How long do I need? At an absolute maximum an hour, but most people popped in and out in 5-10minutes. We looked through all the exhibits and were no longer than 40mintues.

How do I get there? The bank is located on Kralja Petra, off the main pedestrian way Kneza Mihaila.

I know you’re intrigued what the World would look like with the Bank of Poppy and Dom so here you go!

Nothing bad about Novi Sad